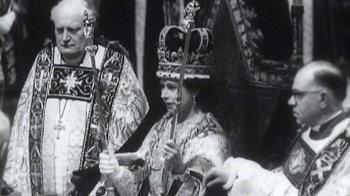 As the BBC focuses on the Queen's coronation, Stephen Evans says the next initiation of the UK's head of state will be a major test of the monarchy's ability to evolve and reflect the nation it serves.

On Sunday the BBC will broadcast an hour-long film on the coronation, the ancient initiation rite in which the monarch of the United Kingdom is formally invested with regalia and crowned at Westminster Abbey.

Today's British citizens (or should that be subjects?) haven't witnessed many coronations. If you're under 64 then you weren't even born when Her Majesty was crowned. Britain has changed a lot since then. Elvis Presley was unheard of and 'How much is that doggie in the window?' was topping the UK charts. Winston Churchill was prime minister, the mighty West Bromwich Albion were challenging for the league title, and never mind the internet – television sets were only just becoming part of the furniture.

But perhaps one of the most significant changes Britain has seen since the coronation is its shift away from Christianity. Today the UK is characterised by its religious diversity and has, for the first time, a non-religious majority.

That's why the next coronation is likely to expose the absurd incongruousness of the close relationship between the state, the crown and the Church of England. The ceremony will be a largely Anglican ritual in Westminster Abbey. The Coronation Oath Act of 1689 will require the monarch to swear to uphold the Protestant faith and "maintain the laws of God", and the ceremony will include Christian sacraments such as holy communion and the anointing of the monarch by the Archbishop of Canterbury. Many will gawp, but it will be meaningless to most.

The precise details of what we can assume will be Charles's coronation aren't known, but reports suggest it will be less grand than Elizabeth II's in 1953. The ceremony is apparently being planned by a committee of "leading members of the aristocracy and other dignitaries" under the codename of "Golden Orb". According to the royal historian Dr Anna Whitelock, the orb is a "hollow ball of gold and a Christian symbol of authority signifying Christ's dominion over the world represented in the next monarch's power". It therefore seems likely that the religious aspects will remain intact. The committee may give the coronation a multifaith feel by inviting representatives of other religions to participate in some tokenistic way, but make no mistake, the Church of England will still be running the show.

But perhaps that's only to be expected with the monarchy being so closely entwined with the Church. The monarch is its Supreme Governor, and must be a member of, the Church of England – and thanks to the Act of Settlement of 1701, absolutely cannot be a Roman Catholic.

So if modern Britain is going to have a monarchy, then surely it must be divested it of its religious role? It can't be sustainable. If future monarchs are to enjoy the religious freedom the rest of us are entitled to, it's highly unlikely that they will share the same enthusiasm for Anglicanism that past monarchs have. Paying lip service to the religious elements of the role would surely be as demeaning to the Church as it would be the Crown?

But the main reason to reform is because all members of British society, irrespective of their religious outlook, should be equally included in and part of our national institutions and events. In Britain we enjoy relative religious freedom, but not religious equality. Secularism strives for both.

Back in 2011, the passing of the Succession to the Crown Act ended the historical disqualification of a person who married a Roman Catholic from the line of succession. The then prime minister David Cameron remarked: "The great strength of our constitutional approach is its ability to evolve." Prince Charles's coronation will provide a major test of the monarchy's ability to evolve to reflect the nation it serves.

The appointment, election or succession of a head of state – whether in a republic or a constitutional monarchy such as the UK – plays an important role in forming and reflecting a nation's identity. At the next coronation, will Britain show itself to be a bastion of religious equality – or will religious privilege still reign supreme?