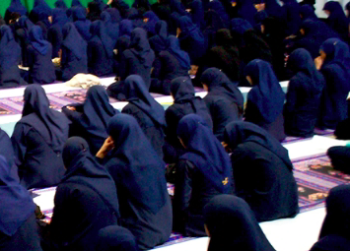 Yasmin Rehman was among campaigners who recently met Ofsted's chief inspector to discuss veiling in schools. Now, she writes, some powerful Muslims are making sinister efforts to silence her and her fellow activists.

As I prepared to mark the International Day for the Elimination of Violence against Women and Girls and to take part in the 16 Days of Activism, I had little idea that a meeting I had attended the previous week would overtake my life in the way it has or present new challenges and dangers for me and my fellow activists. MP Afzal Khan, MEND and Manchester, Stockport, Bolton, Oldham and Rochdale Council of Mosques have all called for for the "names of the women" who attended a meeting with Ofsted on 17th November. The attendees could then be outed as "disconnected from grassroots communities", exhibiting "an intolerant, unsound and incoherent understanding of Islam and Muslim practice" and "stirring up anti-Muslim hatred". Given the accusations, which are simply untrue, I feel I have little choice but to state publicly that I was at the meeting and share the focus of the discussions. The meeting had been organised and publicised several months ago.

The meeting, I had hoped, would be a first step in an ongoing dialogue with Ofsted about the imposition of religious dress codes on young girls in school. The meeting was held weeks after Ofsted's success at the court of appeal in the case against Al-Hijrah school in Birmingham. The discussions held at the meeting were not limited to the imposition of dress codes for girls from Muslim backgrounds; they also addressed concerns about young girls from other faith communities being required to wear religious-cultural-traditional-modest dress in school where the same demands were not made for boys. Discussions also centred on gender equality and safeguarding concerns.

The subsequent reporting of the case did not, in my view, reflect the discussions, so I am not surprised at the ensuing hysteria. I am, however, dismayed that an opportunity to have an adult debate, involving a wider group of stakeholders, has been drowned out by the cries of 'Islamophobia'.

The hijab is a complex and contested issue that for many is at the heart of the debate about freedom of religion and gender equality. Religious scholars, theologians, feminists and academics are divided as to whether it is cultural or religious, mandatory or optional. However, many Muslims believe modest dress can be worn by girls after puberty. The hijab is widely seen by many as a symbol of political Islam and increasing religious fundamentalism. The debates about choice, the hijab and Muslim women rage on, but are not relevant to this article.

In relation to forms of Islamic dress, the discussions with Ofsted focused on the imposition of the hijab and the jilbab (full ankle length dress) on primary school children in Britain. Interestingly, this is not a demand made on young girls in state schools in Muslim majority countries.

Nowadays modesty is expected of younger and younger girls in Britain. A father I spoke to once told me he made his three-year-old daughter wore a hijab in order to "get her used to it". A young girl told me that she had to wear her hijab because she was afraid of burning in hell forever if she did not. For some it may be choice but for others it is clearly not.

The anger in the debate does not allow for a closer examination of the context in which the hijab is worn or indeed the consequences of a girl making a choice not to conform to such dress codes. The question still remains: can children truly make a choice? The consequences range from being isolated by the community to threats of violence. A Muslim man I spoke to, who defended the rights of his mother and sisters not to wear the hijab in a discussion in a mosque, was chased by a group of men and threatened with violence.

Numerous schools in Britain have been flexible in their uniform policies, as they relate to girls, to accommodate the cultural and religious demands of minority community parents. Skirts have been replaced by trousers, gym shorts by jogging bottoms, salwar kameez (long tunic and trousers) in school colours and so on. These accommodations, however, have not been enough to satisfy the increasing demands by faith groups for ever more 'modest' forms of dress for their daughters. It is also interesting to note that some Muslim schools in Britain are not prepared to show the same level of flexibility in their uniform policies. Whilst they demand flexibility from others they impose compulsion themselves.

I note that the Council of Mosques accuse Ofsted of using their privileged position to engineer social change. I, and others, would argue that it is the repeated accommodation of religious identity over all others that has engineered the changes we have seen in recent years. As Pragna Patel states:

In recent feminist discussions on intersectionality and violence against women, it has become fashionable to talk of the intersection of religion and gender and refer to the need to develop a feminist response that is sensitive to the growth of religious values especially in the light of anti-Muslim racism. Yet questions of which social and political forces are at play in demands for greater accommodation of religious identity and who defines religious values and for what purpose are rarely considered.

Concerns arising from the imposition of religious dress codes in schools are not new and certainly pre-date the Ofsted meeting. Saeeda Khanum, writing in 1992, raised concerns about Muslim schools and what this may mean for women and girls. In 2006, the House of Lords (now the Supreme Court) delivered a judgement in the case of Shabina Begum which centred on religious dress codes. The judges in the case took account of the concerns of other Muslim girls at the school who voiced concerns that they would be pressurised into wearing a jilbab. Earlier this year, a primary school in Birmingham became the focus of controversy after banning the hijab for pupils at its school.

The hijab is worn to protect women from the gaze of men – but also to cover the female form so as not to entice men. In response to this latest hijab debate, Judith Nemeth, executive director of the National Association of Jewish Schools, confirms her understanding that the hijab protects modesty when she states that by being covered up young Muslim girls will be able to focus on their education free from the unwarranted attention from the opposite gender.

Only a few months ago, Transport for London axed images of a four-year-old girl wearing hijab in its campaign in schools and nurseries after complaints from religious groups and campaigners – including Shaista Gohir of the Muslim Women's Network, who raised concerns about the sexualisation of young girls.

So why such outrage now when these discussions have been going on since the 1990s? Is it simply because Ofsted have said that they will be speaking to young girls about the hijab? Ofsted speaks to schools about all its policies and to children about a range of issues when conducting school inspections. Or is it because this first meeting was conducted with women campaigners, and some men, who dare to have a different view?

The accusations levelled at those who attended the meeting, and the not-so-veiled threats contained in the demand for names of those who were present, demonstrate that this situation has a much darker and more worrying side. What is the purpose of the demand for names? Should we not be discussing the issues, rather than placing such emphasis on the identities of the individuals? Is it somehow to ensure that those present at the meeting are publicly named and labelled as 'un-Islamic' and "out of touch with Muslim practice", as stated in the letters to Ofsted?

This comes only days after Muslims, deemed to be heretics, were murdered in a mosque in Egypt. It has worrying echoes of the lists compiled by religious fundamentalists that have resulted in attacks on, and murders of, activists campaigning for gender equality, human rights and civil liberties in Bangladesh, Pakistan and elsewhere. Is this the risk campaigners such as myself are now exposed to? This is happening in a context where to argue for the separation of religion and the state is increasingly defined as heresy. Religious identity is increasingly defining social relations and the space for dissent and debate is shrinking. In this context, it will be women and girls who will pay the highest price of all.