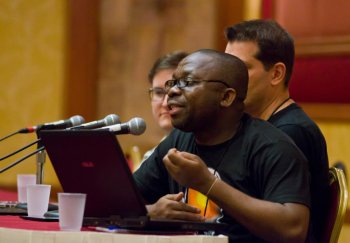 Secularism and controversies regarding the relationship between religion and state have deep roots in Africa's socio–political history, but are increasingly relevant to many pressing human rights issues, argues Leo Igwe.

Recently, the relationship between the state and the church, mosque, shrine and temple has generated heated debates in many countries across Africa.

These debates have focused on issues such as the rights of homosexuals, the reproductive and family rights of women, the adoption of Sharia law, the wearing of the hijab, state sponsorship of pilgrimages, regulation of religious preaching, morning religious devotion in schools, child marriage and others. These debates often pit religious organizations against each other, and contest the place of religion within the state. They testify to the growing influence of religious organizations and the dilemma of governments in postcolonial Africa in dealing with policy or legislation that religious interest groups deem incompatible with their faith and teachings. To legitimize their positions, governments sometimes invoke the implicit or explicit secular character of the state. However, such references to secularism are often met by opposition and objections, especially from religious organizations that claim that their interests have been ignored. They usually criticize secularism as an alien or foreign ideology that has no legitimate stake in African society and politics. Interestingly, however, these opponents of secularism are also imported, as they are local organizations representing foreign religions.

Origin of the word

From the Latin word saeculum, the term secularism means generation or age. It is also used to mean "this world," or worldly. American scholar John Shook claims that in Latin, the term saeculum was useful for distinguishing this temporal age of the world from the divinely eternal realm of God. Anything secular has to do with earthly rather than spiritual affairs. Thus, secularism has an origin that seems to not accommodate religion, at least in its absoluteness, because mainstream religions see the temporal and divine worlds as indistinguishable.

However, the British writer George Jacob Holyoake, who invented the term "secularism," explains that secularism is not anti-Christianity, and by implication not anti-religion. He describes the term as the viewpoint that promotes a social order that is separate from the religious order without actively dismissing or criticizing religious beliefs. He states that secularism is not against nor questioning of Christianity, but is independent of it. Secularism is linked to the West not only by virtue of its roots in the Latin language or its coinage by Jacob Holyoake, but also in its ideological tie to the Enlightenment.

The connection with the Enlightenment

Secular ideas were rooted in the intellectual movement of 17th- and 18th-century Europe called the Enlightenment. This movement gave reason a central place of authority and legitimacy. It questioned the dogmas of the church and opposed absolute power and authority. John Locke, Denis Diderot, Jean Jacques Rousseau, Voltaire, Montesquieu and Baruch Spinoza were among the philosophers whose ideas shaped the Enlightenment. They espoused the values of liberty, progress, scientific thinking, tolerance, constitutional government and separation of church and state.

The Enlightenment modernized and secularized Europe, moving it away from religious totalitarianism and theocratic control. It influenced the French Revolution, a wind of social and political change that swept across French society from 1789 to 1799. The revolution led to clashes between church and state that brought the church under the control of the state and culminated in the law of 1905 that institutionalized the separation of church and state. This law, which is a landmark in European secularism, ensures state neutrality on religious matters and recognition of individual rights. Thus, the French revolution led to a shift in the political paradigm from a state based on the divine rights of kings to a state based on the consent of the governed.

These secular ideas and events not only transformed the politics of Europe, but also informed the social and political ideologies of European colonialists who introduced state institutions to Africa in the late 19th century. However, a pertinent question remains: Is there no tradition of secularism in Africa?

A secular approach in precolonial Africa

What existed before colonialism remains a mooted question. Prior to the colonization of Africa, various empires, kingdoms and chiefdoms existed in the region and were administered based on models of indigenous governance. Different relationships existed between the shrine and the state, the religious order and the governmental order, the sacred and the secular. There were informal secular approaches to governance within these kingdoms and chiefdoms despite a lack of codification.

To illustrate this point, I will draw examples from my native ethnic group, the Igbo in Southeast Nigeria and my academic ethnic group the Dagomba in the north of Ghana. Before colonialism, these groups were organized and some of their political structures exist even today. Among the Igbos, the offices of the "king" (Eze) were distinct from those of the priest (dibia afa or dibia mmuo). There was a separation of powers, based on oral tradition that was handed down from one generation to another.

The Eze were the political heads and oversaw the day-to-day administration of the community, while the priests handled spiritual matters. They performed sacrifices, poured libations and consulted the gods. The priests operated under the chiefs who consulted them whenever the need arose.

Secularism and the colonial state

Colonialism brought profound changes to this socio-political order, because Europeans introduced state institutions that were based on Western socio-political ideologies. The introduction of state mechanisms by colonialists was not a democratic process instituted in accordance with the Enlightenment value of the "consent of the governed" or respect for individual liberty. Nevertheless, colonial structures would eventually lay the foundation for modern-day democracy and constitutional governance in the region.

The colonialists arbitrarily used laws and policies to bring the chiefs and kings under the colonial state administration and overruled aspects of the indigenous socio-political ideologies and practices that they deemed incompatible with their Western models of government. It is important to note that despite the proclaimed secular nature of the colonial state, there was a mix between colonial politics and colonial religion. The colonial government had strong links with Christian missionary churches that operated Western-style schools where Africans were educated and later recruited to serve in the colonial administration.

Apart from those educated in mission schools, Africans who were educated in Europe during the colonial period were influenced by Western political ideologies and philosophies, including secularism, socialism and communism. And these largely Westernized African elites were at the forefront of the struggle against colonialism and the formation of postcolonial states.

Secularism and the postcolonial challenge

At independence, the African political elite adopted constitutions modelled after those of their former colonizers. African countries, particularly former French colonies enshrined secular principles in their constitutions, while former British colonies such as Nigeria made provisions that prohibited state religion, without explicitly stating that the state was secular. The drafters of these constitutions, however, could not officially declare and enshrine secularism due to resistance from those who were against what many believed— and still believe—to be a Western ideology that would prohibit religion and make atheism the state religion.

In addition, the constitutions provided for the application of religious and customary laws to issues related to marriage and family. Even the constitutional provision for freedom of religion or conscience is often used by those pushing a political religious agenda and contesting the secular approach to issues. With the spread of democracy and participatory governance in a region that is predominantly religious, religious organizations have been increasingly influential in public life and the secular approach to issues such as human rights has faced opposition.

Secular ideas from the West influenced African state institutions, despite the existence of a secular tradition that predates colonialism in Africa. During the colonial era, a secular approach to state formation and administration applied in spite of the strong ties between the colonial state and the colonial church. However, in postcolonial Africa there has been constant violation of the secular principle that was espoused at independence. This violation is not because the secular approach is not in agreement with African communal values or because there is a cultural disdain for individual liberty. Rather it is because Africa is in need of its own version of the Enlightenment and French-style revolution to provide a social, cultural and political base for the operation of a secular state.

However, this revolutionary process is going to be more complicated than what took place in Europe in the 17th and 18th centuries because in Africa the secular forces are not just up and against a church but several churches, mosques, shrines and temples with links to the East and West. This means that Africa will eventually have to forge its own models of secularism given its peculiar religious and political predicaments. Until these religious structures and operators are brought under the state, the secular approach to issues will continue to face stiff resistance and secularism will continue to remain on the margins of African politics.

This article was originally published as part of What Secularism Means to Africa: What it has been, what it hasn't been and what it could mean for human rights, a conference coordinated by Catholics for Choice and the Global Interfaith and Secular Alliance. It is reproduced here with permission as part of the National Secular Society's series on International Freedom of Religion or Belief Day.

Leo Igwe (@LeoIgwe) is a freelance journalist, human rights activist and founder of the Nigerian Humanist Movement. The views expressed in this article are those of the author and may not necessarily represent those of the NSS.