Lessons from the frontline of Islamic fundamentalism 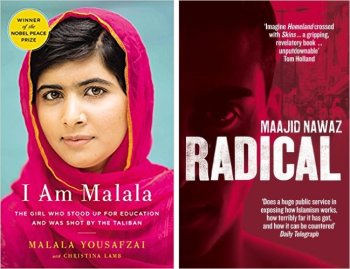 Megan Manson explores autobiographies by two Muslim secularists whose lives have been directly intertwined with Islamist extremism, and asks if the secular pluralism extremists most fear could be our best hope.

"Extremists have shown what frightens them the most: a girl with a book." – Malala Yousafzai

Last week saw another terrorist attack in the UK, when a bomb partially exploded on a train at Parsons Green tube station in London.

In attempt to grasp exactly what's going on inside the head of an extremist, and to try to get an idea of what the solution might be, I turned to the weapons that terrify the terrorists: books.

I read two very different, yet oddly parallel, autobiographies by two Muslim secularists whose lives have been directly intertwined with Islamist extremism.

The first was I Am Malala: The Girl Who Stood Up for Education and was Shot by the Taliban, the autobiography of Pakistani activist and 2014 Nobel Peace Prize recipient Malala Yousafzai who was shot by extremists at the age of 15 for the "crime" of promoting secularism.

The second was Radical: My Journey from Islamist Extremism to a Democratic Awakening by Maajid Nawaz, a British-born Muslim who turned away from Islamist politics after being captured and tortured in Egypt and now works to end extremism. Nawaz is also an Honorary Associate of the NSS.

I Am Malala tells Yousafzai's life story, from her childhood in Pakistan's Swat District up to her attempted assassination and treatment in the UK. A bright and studious girl, Yousafzai began speaking up for the rights of women in Pakistan, and particularly the right of girls to go to school. Through the course of her life, we see how the world around her becomes increasingly dangerous. Conservative Islamist ideology gains popularity with worrying speed. The Taliban grows more powerful and more vicious, destroying schools, whipping people in public and forcing women into purdah (secluding themselves from society by wearing face coverings and minimising their contact with the outside world).

Within this oppressive environment, Yousafzai persisted in speaking out against the Taliban. She blogged for the BBC to reveal to the world what life under the Taliban is like, and made public TV appearances advocating the right of women to be educated. She received national awards for her activism alongside death threats from the Taliban and their supporters.

Yousafzai nearly died for her cause. In 2012 she was shot by a member of the Taliban while riding a bus home after taking an exam. She was airlifted to the UK to be treated, and the rest is history.

In 2013, in honour of Malala, the £7,000 Irwin Prize for Secularist of the Year was donated to Plan UK's Girls Fund – which promotes girls' access to education around the world.

While I Am Malala is the account of a gentle and inspirational individual whose persistence and non-violent actions are helping women to overcome oppression, Maajid Nawaz's Radical is a very different story. In some ways, Yousafzai and Nawaz are inverted reflections of each other: Yousafzai is a Pakistani Muslim girl and victim of Islamist extremism who embraces secular liberal democracy when she comes to live in the UK, while Nawaz is a British Muslim of Pakistani heritage who, for much of his life, rejected liberalism in favour of sympathising with extremists who actively attack western democracies.

The story of Nawaz's journey is fascinating and eye-opening. Growing up in Essex in the 90s, Nawaz suffered racist bullying as a young child and was later subject to racially-motivated attacks from white skinhead gangs as a teenager – experiences that would have far-reaching repercussions in his future. As an impressionable youngster he was recruited by Hizb ut Tahrir (HT), an Islamist organisation that aims to establish an Islamic Caliphate and considers itself at war with the West.

On travelling to Egypt as part of his university degree, Nawaz was captured by officials (HT membership is illegal in Egypt) and threatened with torture. His case was eventually taken up by Amnesty International and he was released. His experiences caused him to re-think the ideology that he had adopted and he decided to renounce Islamism entirely. Nawaz went on to co-found Quilliam, a counter-extremism organisation, and has advised the British government on combating Islamist extremism.

From the very different experiences described in the two books, common lessons emerge, including:

1. Secularism is crucial for a fair and democratic society

In both accounts, suffering is rooted in fundamentalism and the embedding of religious ideals into political policy. Yousafzai and Nawaz now support the ideal that a secular state, in which one is guaranteed freedom of religion and freedom from religion, is the only way to guarantee fundamental human rights.

2. Extremist ideology is volatile and viral

It's hard to imagine how societies end up becoming militant theocracies, but we see that happening in Yousafzai's home town in I Am Malala with terrifying speed. Political instability and military conflict were of course central factors, but what is perhaps surprising is how many ordinary people were not only impassive to the spread of sharia law in Swat, but in fact in support of it.

While things are very different in the UK, Nawaz warns that certain conditions in British society make it easier for extremism to fester: poor community integration, weakness on the part of academic institutions where extremists are active, an "Orientalist" attitude to Muslims that condones extremist ideas, and issues such as racism and discrimination that feed into Islamist narratives.

As Nawaz explains, for an extremist Islam is often less about religion and spirituality, and far more about a unifying identity and political ideology. He recalls that himself and other members of HT weren't particularly devout, and carried out Muslim practises (such as Salat, daily prayers) more as a form of communal ritual reinforcing their Muslim identity rather than as an act of spiritual devotion. In fact, Yousafzai is probably more devout than Nawaz ever has been; I Am Malala contains many references to Yousafzai's prayers and devotions to Allah.

4. Yes, you can be a secularist and religious

Both Yousafzai and Nawaz describe the role of their personal faith in helping them in their darkest moments of suffering brought about by Islamist extremism. Despite the pain and persecution inflicted upon her by Islamist preachers, politicians and militants, Yousafzai found hope and inspiration in her deep faith in Allah.

Similarly, Nawaz seeks refuge in his religion while imprisoned in the dire conditions of an Egyptian jail. There is a touching moment in Radical in which Nawaz comforts a fellow inmate by praying together with him (perhaps the first glimpse we see of his gradual transformation from angry extremist to compassionate humanitarian). Both cases reaffirm the division between Islam as a personal religious creed and Islamism as a political ideology – embracing one does not mean embracing the other – and the idea that one can readily be a secularist and a religious devotee.

Education is so powerful that Yousafzai and her family put themselves in grave danger in order to spread knowledge. The Taliban are so terrified of education that they resorted to shooting a defenceless 15-year-old girl in order to try and eliminate this threat. In Nawaz's account too, extremism flourishes when only one side of the story is told: Islamist propaganda hinges on portraying all Muslims, throughout the world, as victims of evil Western imperialism. Recruits buy into the propaganda because they are never exposed to any other viewpoint. Providing access to good, rounded education, which encourages debate and critical thinking, is an essential form of immunisation against extremist ideologies.

6. 'British values' are a beacon for many

While neither book shies away from examining the role of Western interventionism in the complex issue of Islamist extremism, both I Am Malala and Radical ultimately conclude that the fundamental values of democracy, the rule of law, individual liberty, mutual respect, and tolerance of those with different faiths and beliefs are key to solving the issues of religious extremism.

In addition to the role the BBC played in getting her message out to the world, it was the UK who took in Yousafzai and her family and gave her the life-saving treatment she needed. She lives in the UK to this day. And while Nawaz may have hated what the UK stood for in his youth, it was the action of Amnesty International in Britain and the British government that secured his release and gave him a second chance.

What happened in London last week is particularly sickening because it appears the suspects behind the attack were also beneficiaries of kindness and compassion on the part of British people. It appears they came to the UK as refugees. Their attack on ordinary people is the grossest betrayal and abuse of Britain's compassion, and is also an attack on our fundamental values. I believe it is essential that we defend these values, which have saved the likes of Yousafzai and Nawaz. I therefore encourage others to read these books and other literature about the problem of religious extremism. By arming ourselves with knowledge about extremism and terrorism, we can work to make our country a safe place for everyone – for Muslims and non-Muslims alike.

The original version of this edited review originally appeared on Patheos.

More book reviews from the NSS.