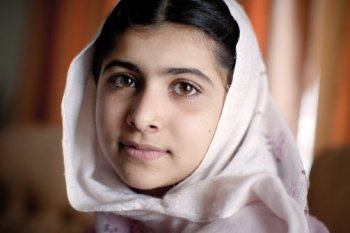 The National Secular Society has donated its Secularist of the Year prize fund to a global charity campaigning to ensure girls everywhere have equal access to education.

The prize fund of £7,000 was awarded to Plan UK in honour of Malala Yousafzai, the schoolgirl from Pakistan who was shot by the Taliban in October for campaigning in support of female education. Her story sparked outrage around the world after the Taliban said they shot Malala for "promoting secularism".

The prize was collected on Saturday at the National Secular Society's Secularist of the Year event by Debbie Langdon-Davies, whose father John founded Plan in 1937. The prize was handed over by NSS honorary associate Michael Cashman MEP. The money will be used to support Plan's Girls Fund which, as part of its 'Because I am a Girl' campaign, helps girls to claim their rights and access life-changing education.

Malala Yousafzai was nominated for Secularist of the Year by NSS supporters for campaigning for girls' education in the face of violent and brutal Islamist opposition.

Terry Sanderson, president of the National Secular Society, said: "Plan UK does fantastic work campaigning for girls' education so we are delighted to be able to offer this award. It is also important to honour the incredibly inspiring Malala Yousafzai, who risked everything to stand up for her, and others', right to an education. Secularism will always champion human rights above religious discrimination and oppression – which is precisely why secularism offers hope to oppressed women and minorities everywhere."

A special achievement award was also presented to the Nigerian Human Rights campaigner Leo Igwe. Leo has campaigned at much risk to himself against the naming of children as "witches" and "warlocks" by manipulative and fanatical evangelical churches. Children branded in this way are often abandoned by their parents or become the subject of mistreatment or even violence.

Terry Sanderson said: "Leo Igwe is an incredibly brave and tenacious fighter for human rights in very difficult circumstances. He has been harassed and threatened by those he has opposed, and so has his family. We were very honoured to have him at this occasion and to honour him in this way. Few people deserve it more."

An award will also be presented to Queen Mary University of London Atheism, Secularism & Humanism Society for their efforts to promote secularism on campus and in particular their defiant and robust response to attempts to close down free expression on campus.

The Irwin Prize for Secularist of the Year award is presented annually in recognition of an individual or an organisation considered to have made an outstanding contribution to the secular cause. The award is sponsored by NSS honorary associate Dr. Michael Irwin. Previous winners include Peter Tatchell, Sophie in 't Veld MEP, Southall Black Sisters, Maryam Namazie, Professor Steve Jones, Mina Ahadi, and Evan Harris MP with Lord Avebury.

About Plan UK
Plan UK is the UK branch of the global children's charity Plan International. It is a registered charity in the UK (number 276035) and has no religious or political affiliations. As part of its Because I am a Girl campaign, Plan UK's Girls Fund helps girls to claim their rights and access life-changing education.

Class Dismissed: Malala's Story
A 2009 documentary by Adam B. Ellick profiled Malala Yousafzai, a Pakistani girl whose school was shut down by the Taliban. Malala Yousafzai was shot by a gunman on 9 Oct 2012. Six months later, Malala now attends school in Birmingham.

See also: Lessons from the frontline of Islamic fundamentalism - a review of Malala Yousafzai's autobiography