Christian country? Politicians should be careful what they wish for 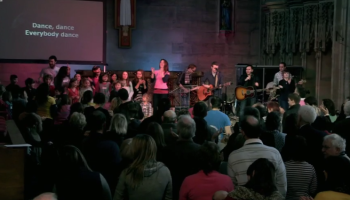 The demise of Anglican Christianity won't herald a uniformly secularised society, but a fractured country where the vast, non-religious majority contend with vocal religious minorities. Secularism must mediate this, argues Benjamin Jones.

A steady stream of regular headlines announce the near-total collapse of Christianity in the UK. But as the BBC's "The Battle for Christianity" documentary shows – that is not the whole picture.

Christianity in the UK is undergoing a radical transformation – away from the village churches of the fading Church of England, towards a form of religiosity once totally alien to Britain.

As the writer Ben Judah puts it, London in particular is experiencing a "religious awakening".

That is taking place against a backdrop of growing religious indifference and secularisation in wider society, but it is hugely significant nonetheless. Christianity in the UK is rapidly becoming unrecognisable.

Judah wrote in the Catholic Herald: "The villages and the small towns in the provinces, not inner London, are where the godless are." Inner cities, fuelled by mass immigration, have seen for many years the infusion of forms of Christianity that are deeply dissimilar to mainstream Anglicanism.

Aaqil Ahmed, the BBC's Head of Religion & Ethics, in a piece published before the documentary's broadcast, asked, "if among this growth is a more assertive Christianity with conflicting views with society on homosexuality, for example, then how do we deal with this?"

If society was becoming uniformly less religious, a secular state would remove anachronisms and be more representative of the population.

If society was becoming uniformly more religious, a secular state would protect the non-religious minority while ensuring religious freedom of the many did not coerce the few.

In fact, society is becoming less religious generally, but some types of radical Christianity characterised by biblical literalism are getting louder and larger (the fastest growing Christian denomination in the UK is a Pentecostal church), while the Christianity still practised by modest numbers of originally British people is liberalising, and more liberal than its leadership. On top of all that, the religious segment of the population (including all minority faiths) is becoming more splintered.

Bishop Alan Wilson warned in the programme of Christianity's fractious future: "I think it is possible that Christianity will become more sectarianized" and split into small, incompatible groups. He said it would be a "very sad future for Christianity".

How to deal with this? At the moment we have a state that accords faith a special role. That obviously causes problems already – but if that position were to be usurped by a much more "assertive" form of Christianity, there would be chaos. Unfortunately, given the precedent Establishment sets, this is a possible outcome.

Religious privileges might be expanded to encompass other faiths – perhaps one day by allowing non-Anglican religious leaders ex officio seats in the House of Lords. There have already been calls for this type of disastrous multi-faithist policy.

Christian Research projects, by 2050, that the Anglican Church will command less than 10% of church-attendance (which is still rapidly declining as a percentage of the overall population) and that "all other" denominations, excluding the Catholic and Anglican churches, will hold over 45% of the total church attendance.

If, as seems certain, Christianity is reduced to a proportionally small rump of the population which is split internally, and minority religions (principally Islam) are rapidly rising thanks to high birth rates and immigration, how can religion and wider society fit together? How can they even cope?

The only way to mediate between these competing religious groups – as the young United States understood – is a Government disinterested in each of them, which grants no special favours, nor places any undue burden on their freedoms. How any kind of common citizenship can exist in such a society is another question, one which may have no answer.

When the politicians of today defend a 'Christian country' they should be careful what they wish for. The mild Anglicanism they defend today may not exist forever, it certainly won't be dominant or even normative for long, and its privileges can easily be taken by other religious groups.

Ahmed also asks in his promotion for the documentary, "If there are more diverse forms of Christianity growing alongside other faiths, can we continue with our blind ignorance and relegation of faith and believers?"

An "ignorance" of faith is not necessarily blind, and it is certainly not a "relegation" of faith and believers to be religiously disinterested as so many in our society are.

He says also that there is a "chronic lack of religious literacy in society" that must be rectified. Of course children should be educated at school about religion (rather than in religion) and prima facie it's a reasonable enough claim. But religious literacy is also a Trojan Horse for those trying to get more religion into schools and elevating the public role of religion generally.

Experts or enthusiasts for any field or subject will think the public is badly informed – often with very good reason.

YouGov found that 34% didn't know when WW1 began. 44% didn't know when it ended. One-in-ten young adults thought the Battle of Britain might have been a Viking attack. 15% of 18-24 year olds think Cromwell led the British fleet at Trafalgar. Little over 10% of university students in one lecturer's poll could name a single 19th century British Prime Minister.

Historical 'illiteracy' blends into religious illiteracy. Many of the students in that same poll had never heard of the Reformation and some didn't even know what Protestant meant.

So given this, where should religion be prioritised against science, history, PSHE? The school timetable is bursting at the seams from campaigns to include many, many worthy subjects in the curriculum.

Though religious leaders won't like to admit it – it is entirely possible for somebody born in Britain today to live their entire lives without any real contact with different religions. In part this is because of the balkanised society we are building – fuelled, incidentally, by faith schools. So the advocates of more and more religion in our education system have something to answer for in that regard.

It should be acknowledged that indifference to religion is a perfectly reasonable position to hold and not always the result of "illiteracy". Far from it.

In the meantime, given these immense changes, should our politicians really be defending privileges for organised religion of any kind? Would they be willing to do so for these more "assertive" forms of immigrant Christianity, or for the most mild form of Islam? I hope not.

It is short-sighted to frame our national identity in terms of our being a Christian country. By 2050 that will mean something very different.

Benjamin Jones is the communications officer of the National Secular Society. The views expressed in our blogs are those of the author and may not represent the views of the NSS. Follow him on Twitter: @BenJones1707.

"The Battle for Christianity" was broadcast on BBC1 on 22 Mar and is now available on iPlayer.