Why we should stop saying ‘Islamophobia’ 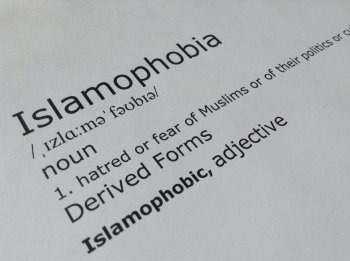 The bigoted views of Islamists and anti-Muslim demagogues must be challenged, but the term 'Islamophobia' only serves to confuse the issues and shut down debate, argues Benjamin Jones.

The NUS Women's Conference made headlines recently after the organisers asked delegates to start using "jazz hands" instead of clapping, out of fear that clapping was "triggering" anxiety. What was not as widely reported was their decision to outlaw "Islamophobia."

Worryingly, the phrase 'Islamophobia' was not defined in the motion: in fact, the word is not truly defined in society generally. The word 'Islamophobia' has long-since entered common usage, but it describes two completely different things.

We need to separate anti-Muslim bigotry, which we might call 'Muslimphobia', from criticism of Islam, both of which are maddeningly labelled as 'Islamophobic'. At present, Islamists and their apologists use this single term to shut down reform of Islam by labelling critics of (and within) the faith with the same neologism used to describe bigoted thugs. The word is repeatedly used to try and taint people by association; thus (for example) Ayaan Hirsi Ali is accused of the same 'Islamophobia' that motivated a man to attack a pregnant Muslim woman.

We must stop equating these two completely separate phenomena, and object loudly when others try to make this spurious connection. To do this, we need to sort out our terminology.

The NUS example (which is sadly one among many) is illustrative. It is difficult to gauge exactly how censorious their policy is without knowing to which of the two meanings of 'Islamophobia' the NUS refers. If, as I suspect, the NUS is referring to both anti-Muslim bigotry and dislike of Islam, or views them as in some way inter-related, the policy is intolerably restrictive.

The trouble arises when society generally does not distinguish, in its language, between these two concepts (bigotry and criticism) – both are grouped together under this one term. Language alters thought; and we now use a single Newspeak term to describe two entirely different things. This constriction of language is restricting debate, and even thought.

As for the practical implications of the censorship the NUS now routinely undertakes, it is unclear what their view would be of an Islamist speaker invited to a university debating society, who said that (for example) it was absolutely fundamental to Islam that homosexuality was not tolerable. 'Left-wing' journalist Mehdi Hasan wrote an article paradoxically entitled, "As a Muslim, I struggle with the idea of homosexuality – but I oppose homophobia". What then is the view of our would-be censors about such a Muslim? Is Mehdi Hasan to be no-platformed for his homophobic views? Or would that be Islamophobic, because (according to Islamists) homophobia is innate to Islamic teaching and must therefore be protected? As Hasan puts it; "Orthodox Islam, like orthodox interpretations of the other Abrahamic faiths, views homosexuality as sinful."

This is the irreconcilable conflict at the heart of the foolish motion the NUS passed: are we to defend this entirely credible interpretation of Islam from critique by shouting 'Islamophobe' at its attackers, or are we to guard the rights of bisexual people not to have biphobic speakers on campus by censoring this evidently mainstream interpretation of Islam? This muddle is just another consequence of the obsession with policing speech to create 'safe' spaces. It is insoluble: censorship is always iniquitous, and can never be fair.

By using one word to categorise both bigotry and the critique of an idea, the idea is given institutionalised defence and insulation.

For some reason the situation is made a little less clear for Islamists than it would be for say, Christians. It goes without saying that homophobic attitudes would be considered abhorrent by the NUS if espoused by a white, conservative, Christian.

The recent debacle at the NUS is a microcosm of the issues playing out in society at large. This recent example is not the only one.

In October 2014 the NUS refused to condemn the Islamic State, because the motion was 'Islamophobic'.

In November 2014, Left Unity voted on (and rejected) a motion which claimed that concepts like "sharia" or "jihad" were simply misunderstood because of the West's "Islamophobic cultural baggage".

Just last month other cases have emerged, many of them from university campuses and from those calling themselves 'left-wing'. Nick Cohen in particular, among others, is trying to prize these elements of the 'left' away from this appeasement.

It is not simply that violence against Muslims and criticism of Islam become conflated; the corollary is also true. Muslims become conflated, by these censors, with Islamist views.

Maajid Nawaz is co-founder and chair of Quilliam – a UK-based think tank which promotes integration, citizenship, religious freedom, and anti-extremism. Yet he, like many other secular and progressive Muslims, faces erroneous accusations of 'Islamophobia' from the Islamist far-right, who wish to present themselves as the only authentic representation of British Muslims.

Maryam Namazie, of the Council of Ex-Muslims of Britain, fell victim to the student censors and the spurious equivalence made between Muslims and Islamism when a talk she had been invited to give on "apostasy and the rise of Islamism" at Trinity College Dublin was effectively cancelled- through the imposition of unfair and intolerable conditions placed upon her, and her alone.

University 'leaders' feared "antagonising" Muslim students. Above all else, this seems like a capitulation to an 'angry Muslim' stereotype, and the bigotry of low expectations. It is another case of ideas (Islam and Islamism) being conflated with people (Muslim students in this case).

Another example of the dangerous 'Islamophobia' charge comes from those trying very hard to discredit Ayaan Hirsi Ali. She is routinely called 'Islamophobic', and even "racist."

For a long time, elements on the 'left' have been conflating Islamism with Muslims; thus granting Islamist ideology the same type of protection afforded by "protected characteristics" like race or sexual orientation.

The question of what language we use is not 'merely' a rhetorical point – it cuts to the heart and reality of the matter. The word 'Islamophobia' was memorably described as "a word created by fascists, and used by cowards, to manipulate morons" and it is succeeding very well in manipulating discussion about Islam.

Only today, the Muslim Council of Britain called upon Muslims to urge parliamentary candidates to fight against 'Islamophobia' and said "for many Muslims, religion – and not ethnicity – forms the basis of their primary identity." This is a more-or-less open affirmation that they seek protections for their religion as though it were a race. The implication then, is that criticising Islam is 'racist', or at least as bad as racism.

The real pity is that actual victims of anti-Muslim hate crimes may well come to be ignored – as people tire of hearing charges of 'Islamophobia' labelled at everyone, from people who write books urging a reform within Islam, to the man who attacked a pregnant Muslim woman because she was Muslim.

At the moment, 'Islamophobia' tends to appear in inverted commas, pointing to its contested status. I expect that before long it will become normalised to the point that it is accepted and the commas are dropped. Language is not irrelevant here: it is essential.

Anti-Muslim bigotry is real; for the good of its victims if nothing else, it absolutely must not be categorised under the tiresome and false label of 'Islamophobia'.

Benjamin Jones is the NSS communications officer.The views expressed in our blogs are those of the author and do not necessarily represent those of the NSS.