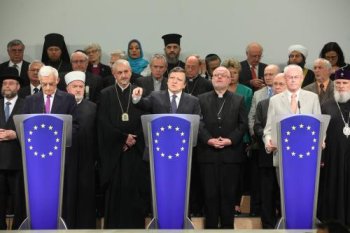 Corporate religion needs to hear the word 'no' more often from our politicians.

An erroneous and damaging assumption has taken root within late modern democracy. It is the notion that close and regular consultation with religious associations and interests invariably contributes to the benefit of society as a whole. Increasingly, however, where corporate religion has exerted an influence over policy decisions, it has tended to result in controversy at best and, at worst, a regressive policy decision.

In 2006 an article in the UK Lancet highlighted stalled progress in achieving greater empowerment for women, particularly those identified as the Millennium Development Goals. The authors, outlining the impact on women's health, pointed to the resurgence of conservative religious forces as the primary reason behind this flagging progress.

In November 2013, the UN General Assembly Third Committee passed an anaemic resolution on violence against women, which was but a shadow of its original self. Religious forces had mobilised to push back against full equality for women. The Vatican, majority Muslim countries and African nations cooperated to reduce the force and potency of the resolution on the basis that it undermined women's 'traditional' familial and societal role.

Also in 2013, at the heart of twenty first century Europe, conservative religious forces successfully undermined European-wide efforts to entrench greater gender equality and a framework for reproductive health policy. A European Parliamentary report and resolution on Sexual and Reproductive Health and Rights was voted down after strenuous lobbying efforts by the religious right.

Paralleling the increasing density of interstate cooperation in Europe, the EU dramatically increased the role of civil society associations – including religious organizations – in supranational governance. They did so principally on the basis that such inclusion would help narrow the so-called 'democratic deficit' between Brussels and the elusive European citizen. Through various phases from 1997 onwards, from the Amsterdam Treaty through to the abandoned Draft Constitution, the EU gradually institutionalised a formal church-EU dialogue mechanism, which finds its ultimate formulation in article 17.3 of the Treaty on the Functioning of the European Union (TFEU). This treaty provision compels the EU, through its various institutions, to hold "open, regular and transparent dialogue" with religious and non-confessional bodies

Lending weight to this structured dialogue between political decision-makers and corporate religious elites was the expanding influence of various strains of communitarian thinking fashionable within political thought. The idea, grounded in the post-Rawlsian assumption that we are all members of 'groups', was that in order to reach the citizen, Europe's institutions should engage more openly with religious 'leaders' in order to bring the spiritual dimension into politics and connect the European project with its distant citizenry.

A former President of the European Parliament, Hans-Gert Pöttering, went so far as to invoke a quasi-Habermasian justification for this dialogue provision: "true dialogue means each component of society is able to express its point of view with respect for the other. Consensus can then emerge from the truth about particular values or goals." It was a nice idea, but it never reflected reality. After nearly a decade of this dialogue interesting patterns have emerged which reveal how this process is actually executed.

The arrangement quickly morphed into a highly fragmented and largely bilateral engagement framework between the EU's main political institutions and conventional corporate religious bodies. It does not embody the plenary format of its nascent beginnings before 2005. This has resulted in the consolidation of the privileged position of the two main Christian traditions (Roman Catholic and Reformist) that have always had a strong connection to the European Commission since the time of Jacques Delors. Only very recently, and ironically after the intervention of humanist groups, did the Hindu, Sikh and Buddhist representatives actually get included in the main dialogue event held every spring. The fate of the secular humanist groups, who had originally chaired informal events in the late 1990s, was a salutary lesson in lobby politics. The humanists were completely relegated to a separate discussion forum, held on a separate date and only with officials, not the Presidents of the main EU institutions.

There is, in short, a two-tier system in operation: one is an effective lobbying platform for high profile and institutionalized monotheistic religious interest groups and the other a far from satisfactory arrangement for less traditional voices, which are in reality granted only token status. This should be concerning, given that significant chunks of the European populace profess no religion, and even more profess only a weak faith at best. What is more concerning is the deviation of the dialogue praxis from the principles of fairness and equality supposedly underpinning it, particularly in the areas of mutual interaction, mutual respect and transparency. In sum, transparency is in relatively short supply and mutual interaction is a chimera. The decisions made about who is selected for dialogue events and what is to be discussed at them is largely opaque.

Other problems that emerge include question marks over how the agenda for discussion is decided. Issues that would actually be useful discussion points with corporate religious bodies have not appeared on the agenda thus far. As far back as 2007 a European Parliamentary Working Group on religion and politics proposed to the presidents of the main institutions that issues such as intolerance of minorities, intolerance of LGBT citizens, gender equality, and freedom of speech, expression and conscience among others should all be up for discussion. None of these issues ever formed the basis of the high level talks between religious groups and political actors. In fact, what emerges on the agenda for discussion is decidedly tame and does not confront conservative religious voices with the real consequences of their ideological commitments.

This state of affairs may well be perfectly legitimate in the world of lobbying, but it does not reflect the spirit of inclusive dialogue between the EU and civil society mooted by the religious leaders. It has not been expanded to be more inclusive, and more meaningful. The result of the failure to embody real dialogue, and the result of this lack of vigilance on the part of many observers, is now clearly visible in the emasculation of international organizations such as the UN and the EU as forces for progressive social policy relative to gender issues. It is not just that religious lobbyists are pushing an anti-secular and anti-progressive agenda. It is that politicians appear to be listening.

Dr Kenneth Houston is Head of the Department of Arts and Sciences at Webster University Thailand. He has published on the subjects of religion, politics and power sharing. This article first appeared on Open Democracy and is reproduced here under a Creative Commons attribution non-commercial 3.0 licence.