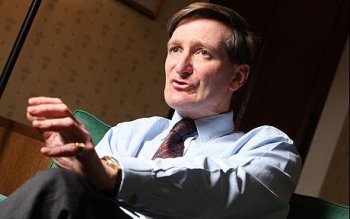 The narrative that Christians are somehow persecuted in the UK – which the Daily Telegraph and former Attorney General Dominic Grieve were happy to promote this week – is a dishonest appeal for privilege, argues NSS president Terry Sanderson.

To support its disgracefully dishonest narrative that Christians in Britain are somehow being persecuted/ intimidated/ silenced/ sidelined, the Daily Telegraph has enrolled former Attorney General Dominic Grieve to its cause.

In an interview on Sunday, the paper quoted Mr Grieve as trotting out all the familiar canards about the apparently terrible prejudice British Christians face in their own land.

Britain is at risk of being "sanitised" of faith because an "aggressive form of secularism" in workplaces and public bodies is forcing Christians to hide their beliefs, a former attorney general has warned.

Dominic Grieve said he found it "quite extraordinary" that people were being sacked or disciplined for expressing their beliefs at work.

He described Christianity as a "powerful force for good" in modern Britain and warned that Christians should not be "intimidated" and "excluded" for their beliefs.

He said that politicians and public figures should not be afraid of "doing God" and that they have a duty to explain how their beliefs inform their decisions.

The "appalling" scenes in Iraq, which have seen Islamic extremists behead and crucify religious minorities including Christians, showed that it was "more important than ever" for people to express their religious beliefs, he said.

He told The Telegraph: "I worry that there are attempts to push faith out of the public space. Clearly it happens at a level of local power.

"You can watch institutions or organisations do it or watch it happen at a local government level. In my view it's very undesirable.

"Some of the cases which have come to light of employers being disciplined or sacked for simply trying to talk about their faith in the workplace I find quite extraordinary.

"The sanitisation will lead to people of faith excluding themselves from the public space and being excluded.

"It is in nobody's interest that groups should find themselves excluded from society." Two years ago the Government changed the law to ensure that councils could not face legal challenges for holding prayers before town hall meetings after the High Court backed a controversial campaign to abolish such acts of worship.

There have also been a series of high-profile cases in which people have been banned from wearing crosses at work or sacked for resisting tasks which went against their religious beliefs.

Mr Grieve, a practising Anglican, said that Britain is "underpinned" by Christian ethics and principles.

He criticised the Tony Blair era when Alastair Campbell, the then communications director in Downing Street, famously said "we don't do God" amid concerns that religion would put off voters.

David Cameron once described his own faith as being like "Magic FM in the Chilterns", meaning it can come and go.

However, earlier this year the Prime Minister said he has found greater strength in religion and suggested that Britain should be unashamedly "evangelical" about its Christian faith.

Mr Grieve said: "I think politicians should express their faith. I have never adhered to the Blair view that we don't do God, indeed I'm not sure that Blair does. I think that people with faith have an entitlement to explain where that places them in approaching problems.

"I think that those of us who are politicians and Christians should be in the business of doing it.

"It doesn't mean that we have the monopoly of wisdom, but I do think Christianity has played an enormous role in shaping this country.

"It's a very powerful force in this country [but] I think it's underrated, and partly because in the past it has failed to express itself as clearly as it might.

"Recognising people's right to manifest their faith and express it is very important."

I have quoted this at length because I wouldn't want to be accused of misrepresenting it.

You will notice that Mr Grieve parrots almost word for word the comments we have previously heard from Lord Carey, Bishop Nazir Ali, Andrea Minichiello Williams, Cristina Odone, The Christian Institute and all the other usual fundamentalist suspects.

It am left wondering just how closely Mr Grieve has looked at the cases he is referring to when making these exaggerated and misleading comments – and, in fact, how much spin the Daily Telegraph has applied to his words.

When he talks of employees being sacked for resisting tasks which went against their religious beliefs, he is presumably referring to the Ladele and McFarlane cases involving a registrar and counsellor who were unwilling, as part of their jobs, to treat gay people as they would anyone else. Both the Supreme Court and Strasbourg, after reviewing all the facts, concluded that their freedom of religion hadn't been denied – they could worship as they pleased – and the adverse and humiliating impact on gay people of allowing such discrimination was unacceptable.

It would be a pretty scary accusation from, of all people, the former Attorney General – the chief legal adviser – if he were suggesting that the courts have in some way been prejudiced in these matters.

Mr Grieve now appears to consider himself one of those unfortunate British Christians who must be silent about their faith – despite the fact that he is trumpeting it from the front page of a national newspaper - just like the Bishop of Leeds and Lord Carey have also been featured recently. Hardly Christians compelled to be silent about their faith, or ones who are being excluded from society.

He says that Christians are being fired because they proclaim their beliefs at work. This is simply not true. No-one is fired simply for stating their religion – it would be against the law.

But people have been fired for pushing their faith on to unwilling people in their working environment, despite workplace codes forbidding it. I think Mr Grieve might be thinking of the case of Nurse Caroline Petrie. This was the nurse in Somerset who– if you believe the Daily Telegraph – was sacked simply because she prayed.

This wasn't quite the whole story of course as you will read if you follow the above link.

It wasn't the mythological "aggressive secularists" who got Nurse Petrie suspended (not sacked, by the way) from her job, it was her own aggressive Christianity. These accounts are careful not to acknowledge that employers were alerted to Nurse Petrie's evangelical use of her working day by another Christian who was commendably concerned about the impact on non-Christians in their own homes. It turned out that Nurse Petrie had done this before and been asked by her employers not to do so again.

We should be careful, of course, to watch where the quotation marks appear in this interview – indicating what Mr Grieve actually said and what the journalist has inferred. There are no quote marks around remarks about the NSS's court case on council prayer, which states that the Government "changed the law" to allow councils to include prayer on their agendas. These words have been inserted by the journalist and again, are plain wrong.

The Government did not change the law. The Communities Secretary Eric Pickles simply announced, after accusing us of intolerance, that whatever the High Court had said was irrelevant, councils should continue to pray. He claimed that the Localism Act said they could, but our legal advisors assured us that it didn't say anything of the kind. Prayers were never mentioned in the debate on the Localism Act, nor referred to in it, which received Royal Assent before the High Court even announced its ruling. Mr Pickles' cleverly-worded assertions are meaningless.

Dominic Grieve is an intelligent man, but I despair at the extent to which he seemingly thinks politicians should explain that their policy-making comes from their religion.

There is an inference in the article that there is some kind of comparison to be made between the status of Christians in Britain and the situation for truly persecuted Christians in the Middle East. This may not be Mr Grieve's opinion, because careful reading of the piece shows the insertion of a lot of the Telegraph's own obsessions not directly attributable, but if Mr Grieve does think along these lines then it is extremely sad. He should realise that those unfortunate Christians in Iraq, Syria, Egypt and Saudi Arabia are being murdered and intimidated because the politicians in these countries cannot keep their religion out of government.

It is something he should bear in mind when he says things like "I think that those of us who are politicians and Christians should be in the business of doing it."

Does he truly want the same situation here, where it is Christians rather than Muslims that are given special privileges (even more privileges than they have already) at the expense of those who have other religions, or the majority who have none?

When Dominic Grieve was sacked from the post of Attorney General in David Cameron's recent reshuffle, I had some sympathy for him. But after seeing this interview, that has evaporated.