Five reasons why secularism is linked to development 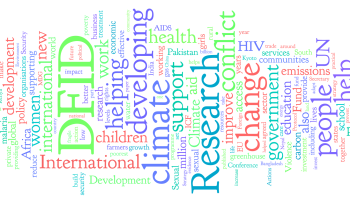 In the Indian election campaign Modi supporters sought frame a choice between development and secularism. While closer to home, the "One of us" campaign has attempted to push Christian beliefs into the EU's international aid policies. Daphne Holmes argues for five reasons why secularism is linked to development.

The conflict between religious beliefs and progress is far from new. Throughout history, religious organisations have been at odds with those who strive for change, and the conflict between the two factions has all too frequently culminated in bloodshed and resentment, rather than resolution. Given the efficiency with which different factions can inflict mass casualties upon those with whom they disagree, a nation that is committed to progress and development would be wise to adopt a secular approach to governance, and avoid the inevitable pitfalls.

1) Embracing minor aspects of the core values of one religion inevitably increases tensions among followers of other religions. While religions by and large tend to share the same core values, many have a very strict interpretation of those values. Far too often, that strict interpretation leads to greater inter-faith tensions, and the ensuing conflict can sidetrack the effort to promote development. As evidence of this, one need only look to the animosity between different Christian sects in U.S. and U.K. history, or the centuries-old conflicts in Iraq. It will be interesting to see how things will play out in India once the Hindu Nationalist Modi assumes the position of Prime Minister, given the tensions that already exist between the Hindus and Muslims in that country, in which Modi has long been a focal point.

2) Supporting a religion results in being controlled by that religion's tenets. Adoption of one set of non-secular beliefs as a basis for governance and development leaves the government vulnerable to having its practices influenced by the followers of that belief, which can (and often does) run contrary to the objectives of a developing society. Efforts to further develop a country's infrastructure or overall culture are often delayed, stymied, or even halted altogether due to even a minor aspect being deemed inconsistent with the dominant religion's beliefs, rituals, or dogma. The inherent conflicts between the church and the state are presented in some detail in The Varieties of Religious Autonomy, by Perry Dane.

3) Religion, by its very nature, is devoted to holding onto historically pre-eminent values and traditions. Those for whom religion is an overarching influence are often compelled to challenge what they perceive to be a headlong rush toward the abandonment of those values and traditions. While secularism is not necessarily devoted to the elimination of religion, it can be difficult to convince devout believers. Some efforts by Western countries to encourage secularism in the Middle East have made this problem abundantly clear. The Eisenhower CIA's 1953 coup that replaced the democratically elected Iranian Premier Mohammed Mossadegh – a devout Muslim – with the more West-friendly but repressive Shah Reza Pahlavi is arguably the most widely acknowledged example of the intensity of religious reactions to the apparent encroachment of secularism.

4) Secular motivations for development are typically more objective than the motivations of non-secular groups and movements. Within each school of religious thought, there are some articles that are expected to be taken on faith, without the requirement that the reasons for their adoption be consistent with the development plan. If a society is to develop effectively, the plans for that development must be based solely upon what is most viable and functional for the society as a whole, without undue influence by elements and factors that are justifiable solely by belief.

5) The sole driving passion behind progressive development must be based in the desire for progress. Non-secular beliefs arouse passions in their followers in ways that purely objective desires cannot. Thus, allowing passion to dictate policy is counterproductive to the development of any society or culture. Those passions have historically given rise to revolution – even violent revolution – which is the most destructive and least efficient form of affecting change. Secularism, on the other hand, is driven to seek the least disruptive and most efficient methods of affecting the changes necessary for a society to develop and progress. When a secular scholar discovers that an assumption fails according to Occam's Razor, the scholar's typical response is typically to seek the simpler, more logical assumption. When a non-secular (religious) scholar is presented with a logical challenge to his or her religious beliefs, the more common response is to defend the belief and attempt to discount or disprove the evidence presented. While the devotion to progress can be driven by faith and belief, the actual process relies upon clear and supportable facts. It is a process that must be devoid of passion – indeed, of the beliefs that drive that passion – if it is to proceed with any success.

Nothing in these arguments is meant to disparage any religion, or to attempt to diminish the value of anyone's beliefs for improving their individual lives. But the key word here is individual. Attempting to apply the unique characteristics of any belief system to a project as broad in scope as the development of society is to diminish the beliefs of those with varying viewpoints. And that is a recipe not for progress and development, but for unending struggle and strife.

Daphne Holmes is a writer from Arrest Records you can reach her at daphneholmes9@gmail.com. The views expressed in this article are those of the author and do not necessarily represent those of the NSS.

Jesus of Nazareth is attributed with saying many...

During 2009 and 2010, the Nova Research Centre, Redcliffe College, Gloucester(which I served as founding Director between...

Is Europe secular or Christian?