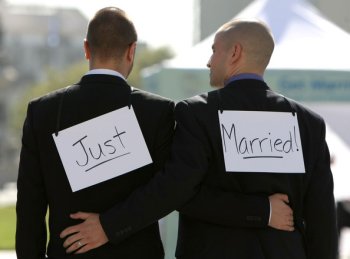 When the issue of same-sex marriage began to arise around the world, the Catholic Church foolishly decided that it would make opposition to it a main plank in its attempts to revive itself. Allied with the Religious Right in America it thought it had a real winner in trying to use it against Barack Obama in the last presidential election.

It didn't work. Obama is still in the White House – with a firm and clearly-stated commitment to gay marriage - and the protestant Religious Right is licking its wounds and wondering how to change its disastrous approach.

The Vatican is engaged in no such navel gazing, though. The new pope has not yet spoken out quite so aggressively on the topic as his predecessor (who is now ensconced in his brand new Vatican apartment with his faithful "secretary", Georg), but his previous writings make clear that he supports the party line.

But then, so did Scotland's homophobic foghorn Cardinal Keith O'Brien – and look what happened to him.

The Church – at least under Ratzinger – had entirely misjudged the international mood. Instead of it leading what he hoped would be a populist and revivalist worldwide crusade against gay marriage, Ratzinger saw some of the greatest Catholic strongholds enshrine it in law.

In trying to flex its muscles against the will of independent states, the Church has lost over and over again. Instead of enhancing its reputation as a beacon of morality in a world gone bad (long ago smashed by the child abuse scandals) it appeared narrow-minded and persecutory.

In Spain, Portugal, Argentina and Uruguay and many other countries that have been claimed as "Catholic", gay marriage is now legal. And this week in Brazil, where the new pope will shortly attend "World Youth Day", the Justice's National Council legalised same-sex marriage in the entire country in a 14-1 vote by issuing a ruling that ordered all civil registers of the country to perform same-sex marriages and convert any existing civil unions into marriages if such a couple desires.

In the US, 13 states have now legislated in favour of same-sex marriage, with several others on the point of following suit.

Only in France did the Church manage to garner any significant opposition that manifested itself in large-scale demonstrations in the streets. Even so, the majority of the population were in favour and the will of the state prevailed. Same-sex marriage is now legal in France.

In Northern Ireland, of course, the matter didn't even get off the starting blocks – such is the power of extremely conservative religious bodies in its assembly.

In Scotland the issue is crawling through parliament with a strong possibility that it will pass.

In England the issue is returning to parliament in the coming weeks. The churches have been strongly opposed to the proposals. The Government has gone out of its way to reassure them that it will be a purely secular matter, in which they will in no way be involved – unless they want to be. But that has not placated them.

Now that it is to be debated in the House of Lords, the chorus of prelates starts up again, issuing dire warnings of the end of civilisation, the termination of religious freedom, the wholesale destruction of everything we hold dear - and probably even a rise in the price of beer.

The new Archbishop of Canterbury met NSS honorary associate Peter Tatchell recently to talk about the issue. Again, like his predecessor, Rowan Williams, he is treading on eggshells, but his Church continues its hysterical opposition.

It seemed until quite recently that the Government was resolved to see the matter through. Then came the local elections and the triumph of UKIP.

The opponents of gay marriage immediately claimed that it was this issue that had caused the rise of Nigel Farage's anti-European group. People were voting against the Coalition because gay people were to be given equal rights!

According to them, it had nothing to do with the economy, the loss of jobs, the destruction of the health service, the dismantling of the welfare state, the brutal Victorian-style demand that disabled people should be forced to find jobs that aren't there or risk losing their benefits. Nothing to do with the widespread alarm about immigration that UKIP so skilfully played into.

It will be interesting to see whether David Cameron's previous firm support for this legislation holds in the face of all this. Or whether, at last, the Church is going to be able to chalk up a victory in its opposition to gay marriage.