French confrontation of church and state over gay marriage 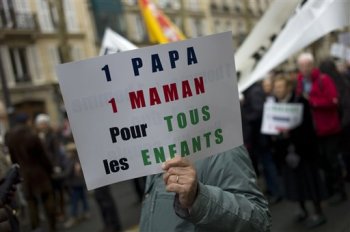 The Law Commission of the French parliament held a hearing on 29 November to listen to representations from six religious leaders (Catholic, Protestant, Jewish, Muslim, Orthodox and Buddhist) on the Government's plans to legalise same-sex marriage. The legislation is planned for early next year.

Each representative was given ten minutes to explain his point of view on the subject to the Commission. Apart from the Buddhists (who are torn on the issue) the five others displayed a rare unanimity in expressing their opposition to the project. They argued that such a law will challenge the "symbolic meaning" of marriage".

When the debate was opened up, some members of the Commission and some deputies denounced the interference of the religions in the public sphere. Alain Tourret, deputy from the radical left party, criticised the role of the Catholic Church in trying to influence the decision. "Globally, you are lobbyists... In fact, all religions exploit the family unit to build their power in society."

He noted that "marriage slipped out of the Catholic Church's hands" in 1792 when it became a civil institution.

Monsieur Tourret declared that "The Catholic Church has always been wrong on social issues and the fracture between the Church and the people is now complete."

Cardinal Andre Vingt-Trois, archbishop of Paris and head of the bishops' conference, said that protests would be held in the streets and a demonstration against the law is planned on Sunday 13 January.

One thing is sure: the Catholic Church is going to lead the battle during the next weeks to make itself heard in the debate.

See also: French Catholic Church seeks to revive itself on the back of gay marriage