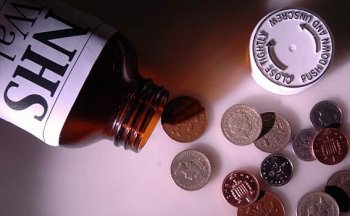 "Went with a friend for her Chemo session. A chap who was a spiritual healer, wearing a chaplaincy badge, was approaching, one by one, everyone who was having chemo treatment, asking if they wanted a session with him (there and then) saying: 'It'll only take 10 minutes, what have you got to lose?' Am I being unreasonable in thinking that people having Chemo are at their most vulnerable, and should not be approached in this way?"

There was no indication at which hospital this occurred or whether the man involved was actually anything to do with the hospital or whether he was just someone who had walked in off the street and was falsely using a hospital chaplain's badge. Either way, his activities point up the need for hospitals to keep a more careful eye on what chaplains are doing in their name.

But it is becoming clear, as the financial noose tightens on the NHS, that chaplains are, at last, taking their share of the pain. The BBC reports that the Diocese of Lichfield is appealing for volunteers to replace a chaplain's post.

The Royal Shrewsbury Hospital and the Princess Royal Hospital Telford used to have two chaplains, now, due to retirement, they have only one. The hospital cannot afford to fill the vacant post, the Diocese claims that it doesn't have the resources to fund it and hence the search for volunteers.

"Hospital chaplaincy is still a very valued ministry in the hospitals, not just for patients but the families and the staff. Even if we can't afford a full-time chaplain we can get volunteers who, if properly trained, could actually assist and work with him [the chaplain]. As long as a person's got the sensitivity that's needed to get alongside people and give them the support they need then the work of the chaplaincy can be expanded. We're inviting people who may feel they have something to offer to come and hear more about the situation in the hospital. We're also looking for people who could help with the administration because when you're in two sites and you're one chaplain you need help to organise everything properly."

Only when push comes to shove will the Church of England admit that the chaplaincy service could be run without putting such a financial burden on the struggling NHS. Volunteer chaplains are already commonplace throughout the hospital service and their contributions could be much expanded – eradicating the need for public funds to be used to finance clergypeople.

In the light of the worsening economic climate, the CofE should think seriously about completely reinventing the chaplaincy provision in hospitals so that it becomes a voluntary, charity funded service, rather like the WRVS which does such a magnificent job without proving a strain on badly needed health service funding. This is the Big Society in action and the Church should follow the WRVS lead.

This is becoming an urgent problem for the Church and if it wants its chaplaincy services to survive the horrendous job cuts that are rampant throughout the NHS, it should start planning now.

It might also stop renegade people, such as the 'healer' mentioned on Gransnet, using hospitals as platforms for their highly dubious promises.