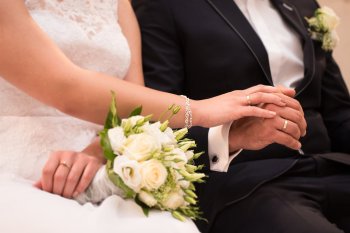 The National Secular Society has backed plans to enable non-religious 'belief marriages' and crack down on forced marriage in Northern Ireland.

The NSS has responded to a consultation by the NI Department of Finance in support of proposals to include belief marriages in marriage law, and to raise the minimum age at which people can enter a civil marriage or partnership from 16 to 18.

But it warned the proposals do not go far enough to address inequality or the risk of child exploitation.

Marriage law in NI allows for two different types of marriage – religious and civil. The proposals would allow couples to have their marriage legally solemnised by a celebrant who subscribes to a non-religious philosophy such as humanism.

The NSS backed the proposals as they would bring about "greater equality and fairness".

But it expressed disappointment that the Department of Finance had not used the opportunity to address other inequities in marriage laws.

This "places a considerable limitation on couples wishing to have a civil marriage or partnership", the NSS said.

It said same-sex couples and less wealthy couples were particularly disadvantaged by these restrictions.

It added couples "should not feel forced to identify as 'humanist' or adopt or feign any other nonreligious identity simply to access greater freedom of where to marry", and that allowing civil marriages the same freedom as religion and belief marriages to take place anywhere would resolve the issue.

It said restrictions prohibiting all religious content should be removed, provided the ceremony remains identifiable as a civil ceremony, to allow couples greater freedom in choosing songs, poems and prayers to personalise their weddings.

Removing restrictions on wedding venues and content in civil ceremonies were also among the reforms proposed for wedding laws in England and Wales last year by the Law Commission.

The NSS also said there is "a strong case" for independent officiates to be enabled to conduct legally-binding marriage ceremonies.

The Department of Finance is proposing to raise the minimum age for marriage or civil partnership to 18, in line with recommendations from the United Nations Committee on the Rights of the Child.

The law currently allows people aged 16 and 17 to enter a marriage or civil partnership with 'parental consent'.

The NSS supported the proposals, saying that letting individuals aged under 18 marry with parental consent is "inappropriate in a society where children are not considered parental property" and where marriage is considered "a matter, first and foremost, for the two people getting married".

The NSS said the current law increased the risk of forced marriage, particular for young people in insular religious communities. It said LGBT+ people in these communities were at additional risk.

The NSS warned there is a growing problem in the UK of children under 18 entering unregistered religion only 'marriages' and that NI "must tackle this issue if it is to adequately protect children from abuse".

It also said a lack of sex education can contribute to forced marriage, which is why "it is so important for all children and young people in Northern Ireland, especially those within religious communities, to have age-appropriate and objective education about relationships and sex".

While RSE is mandatory in NI schools, the curriculum is a matter for each school to decide based on their ethos.

NSS head of policy and research Megan Manson said: "We welcome these proposals to modernise Northern Ireland's marriage laws by enabling humanist and other non-religious belief marriages alongside religious marriages.

"However, the consultation is a missed opportunity to address the glaring inequalities caused by the restrictions imposed on civil ceremonies which don't apply to religious marriages. Simply enabling belief marriages won't make this go away. If NI is serious about marriage equality, it should end the unnecessary restrictions on civil marriages and civil partnerships.

"We also welcome the proposal to raise the legal age for marriage to 18. This is an important step in tackling forced marriage, and should also be adopted in other UK jurisdictions."

The consultation closes on 18 February.