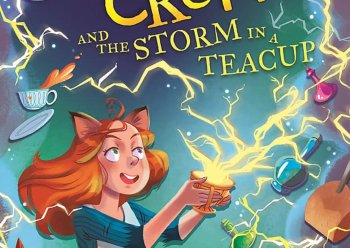 Andy Sagar said on Twitter on Friday that his first school event in London had been called off because the school "didn't want to be seen to be 'promoting witchcraft'".

Sagar's debut children's book 'Yesterday Crumb and the Storm in a Teacup' (pictured) was published in March and features a magical teashop run by a witch. Last month the Sunday Times named the novel Children's Book of the Week.

The Sun reported that the school in question is a faith school.

Sagar, who previously worked as a teaching assistant in a primary school, is pursuing a PhD on the role of law in historical witch-hunts, which inspired his fiction.

GP Taylor: 'The need for secularisation'

Several Twitter users responded to Sagar's tweet with their own experiences of books featuring witches being banned in UK schools.

Fellow children's author and ordained Anglican vicar GP Taylor said his books, which feature magic but are inspired by Christianity, had been locked in the safe of one school after an evangelical parent complained they were "evil".

He said: "As a Christian heavily influenced by paganism I was very shocked that a number of schools excluded my books from their libraries as they had pagan content".

He added that these schools were usually 'church schools' and said this indicated the need to secularise the school system.

Twitter user Jacqueline Harris said at her first teaching practice she experienced a similar issue when the school decided to ban all books with mention of witches.

She said: "They had trouble when they found the maths scheme had counting cauldrons and witches hats!"

NSS head of policy and research Megan Manson said: "Schools banning children's authors because of concerns their fantasy books promote witchcraft shows that deference to religious taboos is getting out of control in our education system.

"We are particularly concerned that the religious institutions behind faith schools may put school leaders under pressure to reject texts, however innocuous, that could be perceived to contravene the ethos of the school.

"The Department for Education needs to show some leadership and support schools to expose children to a wide variety of books without fear of religious censorship.