Ep 55: Pastafarianism and the meaning of ‘religion’ 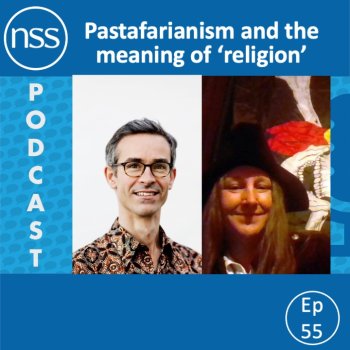 A spoof religion devised to mock creationism has attracted a global following. But what does 'religion' mean anyway?

In this episode, Emma Park speaks to three guests with different perspectives on Pastafarianism and the challenge that it poses to religious privilege.

Derk Venema (03:20) is an assistant professor in legal philosophy at the Open University of the Netherlands. He was the legal counsel for two Pastafarians who featured in the 2020 documentary I, Pastafari. Derk talks about their court cases, the difficulties of letting the state decide what counts as a religion, and the requirement that a religious belief should be 'serious'.

Captain Tanya Watkins (28:35) is the self-appointed leader of the Church of the Flying Spaghetti Monster in Australia. She discusses her failed attempts to have her church legally incorporated, as recognised religions can do, and explains why Pastafarianism is really about being nice to people – and eating pasta.

Dr Tony Meacham (43:17) is a law lecturer at Coventry University. He considers the challenge which movements like Pastafarianism pose to traditional definitions of 'religion', and the place of religion in English law.

A spoof religion devised to mock creationism has attracted a global following. But what does 'religion' mean anyway? Join @DrEmmaPark with guests Derk Venema, Tanya Watkins and Tony Meacham to find out.
Click to tweet