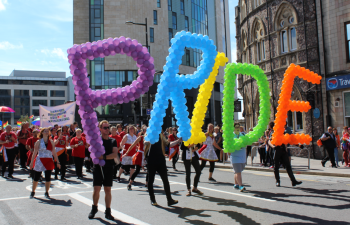 The National Secular Society has called on the Welsh government to challenge religious homophobia in education, healthcare and charities.

The Welsh government is consulting on its LGBTQ+ action plan, which aims to tackle inequalities and discrimination experienced by LGBT+ people.

In its response, the NSS highlighted barriers posed by religious organisations in achieving LGBT+ equality in Wales. It said the action plan needs "greater focus on the role on religion in anti-LGBT+ hate and discrimination".

The NSS welcomed the government's proposal to deliver "LGBTQ+ inclusive RSE for all". But it "strongly recommended" the government revisit recent curriculum reforms that still permit faith schools to teach relationships and sex education (RSE) from a faith-based perspective. This means children at some faith schools will continue to be taught same-sex relationships are wrong, the NSS said. It highlighted its 2018 findings that all 12 state-funded secondary schools in Wales with an RSE policy were teaching the subject within the tenets of Catholicism or the Church in Wales.

The NSS said organisations that actively promote anti-LGBT+ ideology should be prevented from registering as charities. It recommended removing 'the advancement of religion' from the list of recognised charitable purposes, because it enables charities to promote homophobia as part of their religious ideology. It gave examples of a Cardiff-based Islamic charity with a video on its YouTube account about how to 'prevent sodomy' via Islamic modesty codes, and a Christian charity, also in Cardiff, that says anything that's not part of "God's good plan" for marriage should be "put to death" in a Sunday School resource.

The NSS recommended a review of gaps in the Equality Act 2010 that allow religious organisations to discriminate against potential employees on the basis of sexual orientation, gender reassignment and religion or belief. It warned this may be over-used to build an "exclusively heterosexual workforce".

"However, the government has shied away from challenging the religious fundamentalism that poses some of the greatest barriers to LGBT+ equality.

"Without taking this on, particularly in schools and charities, we will sadly continue to see anti-LGBT+ propaganda being promoted in the name of religion."

The consultation closes on 22 October.