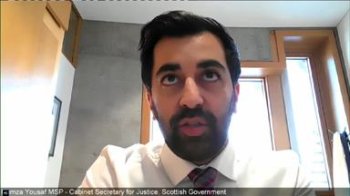 New proposals from the Scottish government could substantially weaken the protection for freedom of expression on religion in its current hate crime bill – even though this appeared to be settled.

The bill, which was introduced last year, would create new offences of 'stirring up hatred', including on the grounds of religion.

Earlier this week the Scottish parliament's Justice Committee approved several amendments to it, one of which would provide greater protection for freedom of expression on religion.

But on Thursday the committee issued a call for views on four new options for freedom of expression protections, which have been proposed by the justice secretary.

Only two of the options contain the agreed amendment on free speech on religion. The other two substantially dilute protection for freedom of expression on religion in comparison.

The committee has requested that views on the proposals be submitted by 10:00 this coming Monday (22 February).

The National Secular Society has been among those warning that the 'stirring up hatred' offences within the bill pose a threat to freedom of expression, and has criticised the latest confusion.

How the new options differ from the agreed amendment

A conviction for 'stirring up hatred' on religious grounds would require the prosecution to demonstrate that the accused had behaved in a manner which is "threatening or abusive" and intended to stir up hatred.

One of the amendments would have provided greater protection to expressions of "antipathy", "ridicule", "dislike" or "insult" of religion or belief.

The Scottish government previously agreed to the amendment, and the committee approved it unanimously this week.

But two of the four options now proposed only say behaviour would not reach the threshold for prosecution "solely on the basis that it involves or includes discussion or criticism" of religion.

The NSS previously argued that the original amendment should be toughened further, to bring it in line with an equivalent clause in England and Wales's Racial and Religious Hatred Act.

"The level of protection for freedom of expression on religion in this bill appeared settled. The agreed amendment was a significant step in the right direction and the Scottish government shouldn't be reopening this.

"This episode simply reinforces legitimate concerns that the bill will unacceptably intrude on freedom of speech. With this in mind, and amid a deeply confused and rushed process, MSPs should press pause on the relevant section of this bill."

The NSS has warned that the 'stirring up hatred' offences in the bill pose a threat to freedom of expression since it was introduced last year.

The NSS has lobbied for substantial changes, including a robust protection for free speech on religion.

The society has also joined the Free to Disagree campaign, which is warning of the threat the bill poses to free speech.

Last week the NSS was among civil society groups who signed a joint letter urging ministers to defer scrutiny of the 'stirring up hatred' proposals until after the May election.

Amendments since introduction of bill

The Scottish government has previously announced several amendments to the bill.

These have included the introduction of a "reasonable person" test, to apply when charges are brought on the basis that behaviour was "abusive", and a requirement to demonstrate intent to secure a conviction for 'stirring up hatred'.

The bill as initially drafted would have also enabled convictions in circumstances where it was "likely" that hatred would be stirred up.

The justice minister has this week lodged an amendment in the bill which will protect expressions of "antipathy, dislike, ridicule or insult towards" religion. This is in line with previously agreed language.

The bill is expected to face a final vote next week.

Image: Humza Yousaf, the justice secretary, speaking to the Justice Committee this week.