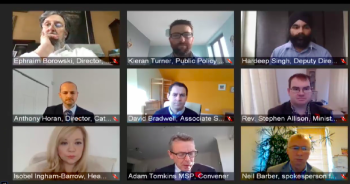 The National Secular Society has said a planned hate crime bill will "intimidate" free speech in evidence to the Scottish parliament's justice committee.

NSS spokesperson for Scotland Neil Barber (pictured, bottom right) also called for a more robust freedom of expression protection in the bill as he gave evidence to the committee on Tuesday.

He appeared alongside representatives from a range of other groups, including the Network of Sikh Organisations (NSO), the Evangelical Alliance and the Scottish Council of Jewish Communities.

The bill would outlaw 'stirring up hatred' on a variety of grounds, including religion. The relevant part of the bill, which is currently making its way through the Scottish parliament, would criminalise behaviour deemed "threatening or abusive" and intended to stir up hatred.

Until recently the bill would not have required the prosecution to prove intent to secure a conviction if it could show instead that it was "likely" hatred would be stirred up.

The justice secretary Humza Yousaf recently announced that he would introduce amendments to the bill to make intent a prerequisite to a conviction.

During his evidence Neil Barber described the plan to amend the bill as "a step in the right direction".

But he warned that writers could still anticipate "lengthy, stressful" investigations and court cases and that prospect would cause the "intimidation of free speech right from the start".

He warned the vagueness of the bill's wording, particularly regarding 'abuse', would lead to vexatious accusations of 'stirring up hatred'.

He urged the committee to build in "a much stronger protection" for freedom of expression, noting the example of the Racial and Religious Hatred Act in England and Wales.

A clause in that act says the law shouldn't restrict "discussion, criticism or expressions of antipathy, dislike, ridicule, insult or abuse of particular religions or the beliefs or practices of their adherents".

Currently the equivalent clause in Scotland's bill says only that behaviour will not be judged as threatening or abusive "solely on the basis that it involves or includes discussion or criticism of religion or religious practices".

Several other contributors also stressed the potential chilling effect of the legislation as currently drafted, including Hardeep Singh of the NSO and Anthony Horan of the Catholic Parliamentary Office.