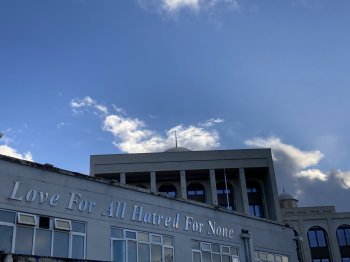 The National Secular Society has urged the government to explain why it has "accommodated" hatred of Ahmadi Muslims, after they were apparently removed from a list of Muslim denominations in a review.

The NSS has written to the Ministry of Housing, Communities and Local Government (MHCLG), which is leading a review of the government's engagement with faith groups, after comments from Labour MP Siobhain McDonagh.

Last week McDonagh, the chair of the all-party parliamentary group (APPG) for the Ahmadiyya Muslim Community, asked for a debate over the review in parliament.

She added that MHCLG had "quietly removed Ahmadi Muslims from the list of Muslim denominations after angry representations from radical groups such as Khatme Nubuwwat".

The NSS has now written to Robert Jenrick, the department's secretary of state, to urge him to investigate the allegations.

In the letter NSS chief executive Stephen Evans noted the systematic discrimination facing Ahmadis in Pakistan and rising anti-Ahmadi extremism in the UK.

He wrote: "Anti-Ahmadi hatred and discrimination represent an insidious threat to community cohesion, equality and in some cases even the lives of Ahmadi Muslims in the UK.

"We therefore urge to you urgently investigate allegations that Ahmadi Muslims were erased from the survey."

He also reiterated a recent call for the government to redesign its review to address its inbuilt pro-religious bias.

"This shameful episode serves as a reminder of how accommodating the demands of religious groups can undermine equal citizenship and lead to divisive policies that privilege one group of people to the detriment of others.

"We therefore reiterate our call for this survey to be disregarded and the review redesigned to ensure the public are consulted in a fair and impartial manner, and the widest possible spectrum of opinion is sought in formulating government policy."

Anti-Ahmadi extremism in the UK

A report from the APPG in July called on the government to confront the rise of anti-Ahmadi extremism in the UK.

The report named Khatme Nubuwwat as "one of the main organisations that has been at the forefront of the anti-Ahmadi hatred and violence".

It also said the group "promotes the view that Ahmadis should be given the death sentence if they do not leave their faith".

In response to McDonagh's question the leader of the House of Commons, Jacob Rees-Mogg, described it as "deeply concerning" and said he would raise it with MHCLG.

The NSS has responded to the survey. It criticised the biased nature of the review and recommended a number of reforms to eliminate faith-based discrimination and ensure everyone's freedom of religion or belief is equally recognised.