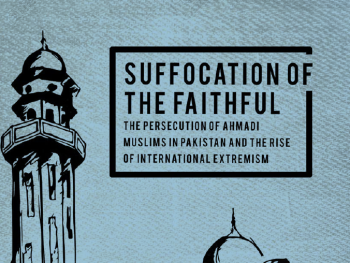 The government must take "urgent" steps to curb the rise of extremism and hate against Ahmadi Muslims in the UK, a parliamentary group has warned.

The all party parliamentary group (APPG) for the Ahmadiyya Muslim community highlighted anti-Ahmadi discrimination and propaganda in the UK in a report published on Monday.

Anti-Ahmadi discrimination and hate in the UK

Chair of the APPG Siobhain McDonagh MP said the "overspill" of hatred against Ahmadi Muslims to the UK was "perhaps the most worrying" issue identified in the report.

The report said the murder of Ahmadi Muslim Asad Shah in Glasgow in 2016 served as a "stark illustration" of the effects of anti-Ahmadi sentiment.

Other incidents detailed in the report included:

The report said Ahmadi Muslims also face day-to-day discrimination, including unfair dismissals from employment, boycotts of their businesses, and bullying of children from Ahmadi families at school.

It also highlighted the Muslim Council of Britain's track record of not accepting Ahmadis as Muslim.

Ahmadi Muslims or Ahmadiyya are a minority sect in Pakistan, where their persecution is "severest" according to the report.

It is a criminal act punishable by imprisonment or death for Ahmadis to identify as Muslims under Pakistan's blasphemy laws.

Much anti-Ahmadi hatred stems from their support for a secular state of Pakistan rather than a model based on Islamic law.

The report said anti-Ahmadi hatred is taught to children in schools, including in their textbooks. It said a large amount of aid granted to Pakistan by the UK and other countries is used to support education, but "insufficient checks" mean UK aid could be used to further anti-Ahmadi propaganda.

"Anti-Ahmadi hatred and discrimination is an insidious threat to community cohesion, equality and in some cases even the lives of Ahmadi Muslims in the UK. Authorities must not turn a blind eye to anti-Ahmadi extremism – especially when it is facilitated by the charitable sector and UK aid."