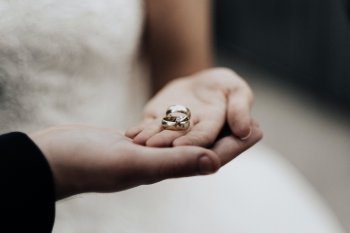 The High Court has ruled that marriage law in England and Wales gives rise to discrimination on religion and belief grounds, in a judgment which could prompt wide-ranging reform.

But their attempt to secure legal recognition for Humanist marriage was dismissed because the government is "considering the appropriate remedy" as part of a "wholesale reform" of marriage law.

The couples desired to be legally married "according to the usages of" Humanists UK, which supported their claim, and without the attendance of state officials at their weddings.

They said they were being treated differently because religious groups can have legally-recognised marriages. They claimed a breach of the right to freedom of religion or belief, which is protected by human rights law.

Mrs Justice Eady accepted the government's defence that reform of marriage law cannot be undertaken in a "piecemeal" fashion.

She added that if Humanist marriages were given legal recognition "that may well give rise to questions as to whether wider reforms are necessary".

The court noted that the Law Commission concurred with the government's view and is set to hold a consultation on marriage law later this year.

Currently Anglican, Jewish and Quaker marriages are automatically recognised in law. Marriages of other religious groups are legally recognised if they take place in a registered place of worship.

Civil marriages must take place in 'approved premises' and no religious content is permitted in the ceremony.

The National Secular Society is campaigning for wide-ranging reforms to the marriage laws to ensure greater simplicity, equality and freedom for all.

"We welcome the clear recognition from the court that England and Wales's current marriage laws are discriminatory and not fit for purpose.

"It is also encouraging that the court recognises the wisdom in wider reforms to marriage law to ensure equality for all. Marriage legislation has been made on a piecemeal basis for too long, resulting in an over-complex system that privileges some groups and discriminates against others.

"Our proposals for one marriage law for all, suitable for all couples whatever their religion or belief, would give much-needed simplicity, clarity and equity to the institution of marriage. We look forward to discussing these further with the Law Commission."

Photo by Doğukan Benli from Pexels.