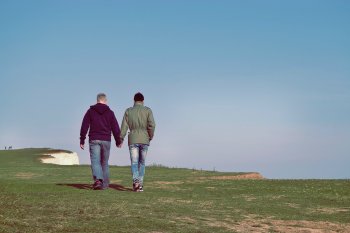 In a letter to NI's chief charity commissioner Nicole Lappin, the NSS said promoting such therapy was not in line with charities' requirement to serve a public benefit.

The NSS has also written to Northern Ireland's communities minister Deirdre Hargey and health minister Robin Swann over the issue.

The letters come after Swann made a commitment to put the issue of LGBT conversion therapy "in our work scope" in the Northern Ireland Assembly in February.

The harm caused by conversion therapy has been widely acknowledged by leading psychotherapy bodies and the UK government.

The trust says the therapies it promotes "support client goals to prioritize (sic) conservative religious values over their same-sex attractions in identity development".

The trust is registered as a charity in NI, with one of its charitable purposes being to advance religion.

Under its objects of association, it encourages "lifestyle choices consistent with Christian living" and upholds the view that sexual relationships outside heterosexual marriage are "inconsistent with" the Bible.

In its letter to Lappin the NSS wrote: "Given that this practice can cause individuals significant mental health issues and harms society by reinforcing stigmas against LGBT+ people, we believe a clear tension exists between the public benefit requirement and the promotion of 'conversion therapy'.

In its other letters the NSS asked the ministers to work with the commission to ensure "no charity" could "promote or facilitate this harmful and ineffective pseudoscientific practice".

The society added that the legal provision which makes 'the advancement of religion' a charitable purpose should be re-evaluated.

"Northern Ireland's executive and Charity Commission should review the status of organisations which promote these so called therapies and remove their charitable privileges if they keep pushing them."

In a statement to the Belfast Telegraph, the Charity Commission for Northern Ireland said the NSS's letter would be considered in detail.

A spokesperson added that a charity's purpose "must be beneficial, not harmful".