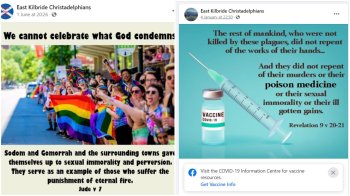 Scotland's charity regulator will not intervene in a Christian charity that the National Secular Society reported for making anti-vaccine and homophobic posts on Facebook.

The Office of the Scottish Charity Regulator (OSCR) launched an investigation into East Kilbride Christadelphian Ecclesia after the NSS made a referral in February.

But according to the Daily Record, OSCR concluded that the views expressed by the charity "are in accordance with their religious beliefs" and therefore action cannot be taken.

OSCR said: "In line with the Equality Act, we will not intervene in the activities of religious charities seeking to promote their ­religious beliefs unless their activities have the clear and direct effect of harming others or otherwise breach the law."

But the NSS has contended that East Kilbride Christadelphians' Facebook posts may cause harm by fostering homophobia and undermining public health messages, despite charities being required to serve a public benefit.

OSCR guidance says registered charities "must actively provide benefit". Furthermore, an organisation may fail the charity test if it causes "actual or likely detriment or harm".

East Kilbride Christadelphian Ecclesia is registered with Scottish charity regulator OSCR under the purpose of "the advancement of religion".

The NSS found many memes posted on East Kilbride Christadelphians' Facebook page in 2020 and 2021 promoting anti-LGBT hate and conspiracy theories relating to the pandemic and vaccines.

Other memes suggested Bible stories about God destroying gay people should be taught as "LGBT history" and implied gay people are 'wolves in sheep's clothing'.

The charity has continued to make homophobic posts following OSCR's decision. Last week it posted a picture of a Pride parade with the caption: "Sodom and Gomorrah and the surrounding towns gave themselves up to sexual immorality and perversion. They serve as an example of those who suffer the punishment of eternal fire" (pictured).

The NSS campaigns to reform charity law to remove the privilege the charitable purpose of 'the advancement of religion' gives religious organisations.

NSS head of policy and research Megan Manson said: "It is concerning that OSCR is unable to intervene in a charity that promotes anti-vaccine conspiracy theories or anti-gay propaganda, if the charity is able to frame these messages in religious terms.

"We fail to see what active benefit East Kilbride Christadelphians are providing the public, while it is quite easy to see how their anti-vaccine and homophobic messages could cause detriment and harm.

"If OSCR is unable to hold religious charities to the same high standards as other charities, this must prompt reforms to charity law. This includes reconsidering the inclusion of 'the advancement of religion' on the list of charitable purposes."