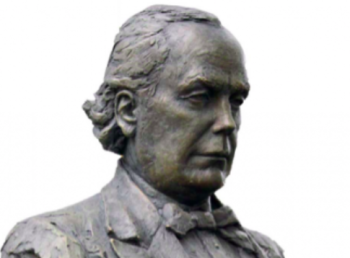 The National Secular Society has launched a series of lectures on the history of secularism which will air during the current period of lockdown and social distancing.

The 10-part series will see NSS historian and council member Bob Forder address the roles of influential thinkers and activists from the 18th century through to the 20th.

Episodes will focus on figures including Enlightenment thinker Thomas Paine; G.J. Holyoake, who coined the term 'secularism' in the 19th century; the founder of the NSS, Charles Bradlaugh (bust pictured); and his close associate Annie Besant.

The series will also address subjects such as Bradlaugh and Besant's trial for disseminating information about birth control and Bradlaugh's struggle to enter parliament after he was effectively barred from taking his seat as an MP.

The series has begun on the NSS's YouTube channel, with the first two episodes published today.

Speaking during an upcoming appearance on the NSS's podcast series, Bob Forder said he hoped the series would highlight lessons from the past and provide some "cracking stories about extraordinarily brave people who deserve to be remembered".

He added that an understanding of an organisation's history helped to lend it legitimacy and would help to provide a sense of purpose to secularists of the present.

NSS chief executive Stephen Evans said: "We very much look forward to this series. Bob Forder's enthusiasm for and knowledge of radical history are difficult to match and we're very grateful that he's given his time to address such an array of fascinating topics.

"We hope this will help to support, educate and entertain people not only during the current lockdown, but for months and years to come."

The 10 episodes of the series will focus on the following subjects:

You can watch the episodes which we've published so far through our playlist on YouTube.

Bob forder discussed the series on episode 24 of the NSS podcast.