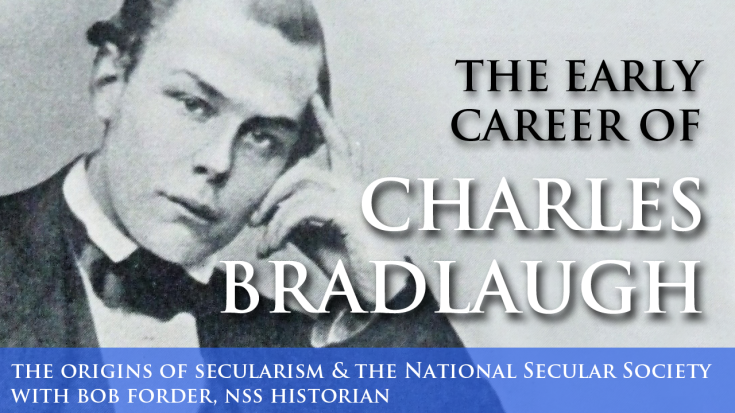 Charles Bradlaugh was born in Hoxton, East London on 26 September 1833, the eldest of six children. Today his birthplace is marked by a London Borough of Hackney brown plaque.

Bradlaugh's origins were humble, his father (also Charles) being a solicitor's clerk. He was always to think of himself as being of the poor and speaking on their behalf.

His upbringing was orthodox and as a youngster he attended Saint Peter's Church, Hackney Road. He was soon identified as one of the brightest pupils and appointed as a Sunday School teacher by the Reverend John Graham Packer.

During his studies of the four gospels the young Bradlaugh wrote to Packer for advice and explanation of biblical inconsistencies. He was met with an unexpected and unfriendly response. Packer condemned Bradlaugh to his parents and removed him from his post as a Sunday School teacher. Matters developed rapidly after this with Bradlaugh renouncing his religious beliefs.

The Reverend Packer persuaded Charles Senior to give his son three days to change his mind. Bradlaugh did not hesitate or compromise and at the age of 16 left home and took up lodgings with Eliza Sharples, the former mistress and co-worker of Richard Carlile. As such he had philosophically and physically joined the ranks of radical freethought.

In the years that followed he began to write and lecture although he struggled to make a living, eventually enlisting in the army for the bounty. He was sent to Ireland where the misery he saw made a lasting impact. However, army life did not suit him and he was bought out, returning to London and the editorship of freethought newspapers, eventually assuming control of the National Reformer which was to be his mouthpiece for the rest of his life. By now Bradlaugh was well-known as a popular, radical, republican and freethought speaker attracting large crowds wherever he spoke.

Bradlaugh's founding of the NSS, his prosecution for publishing information on birth control, his long struggle to claim his duly elected seat in Parliament, as well as his great successes once in Parliament, and his early death are a remarkable part of the Society's history.

As well as exploring the other sections in our history pages, you may be interested in our review of Bryan Niblett's definitive biography, Dare To Stand Alone: The Story of Charles Bradlaugh.