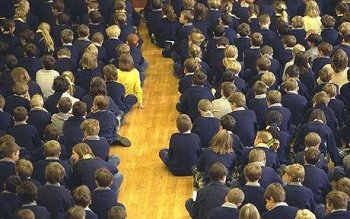 The National Secular Society has welcomed a bill that proposes to scrap compulsory religious worship in non-faith schools in England and replace it with inclusive assemblies.

The Education (Assemblies) Bill 2020, which has been proposed by Liberal Democrat peer Lorely Burt, would amend the current legal requirement to hold acts of worship.

Schools in England and Wales are currently legally required to hold acts of collective worship, and to require children to participate, under the 1944 Education Act.

Many schools ignore the law with the tacit approval of the Department for Education and Ofsted inspectors.

"Ending the requirement to hold acts of worship in non-faith schools would strike a blow for children's rights and common sense. There is no good reason why schools which have no religious character are legally required to impose religious practice on children.

"Ultimately no child, whether in a faith school or not, should be compelled to worship in school. The current law requiring schools to hold acts of worship is out of step with contemporary society and incompatible with a genuine respect for human rights. It should be repealed."

The NSS campaigns to end the collective worship law; advocates inclusive, secular assemblies for all; and argues that worship should not form part of the official school day.

The bill comes shortly after two parents, Lee and Lizanne Harris, secured a commitment to provide an inclusive alternative assembly at their children's school after threatening legal action.

The bill has been proposed with support from Humanists UK. It was entered into the ballot of bills to be heard in the House of Lords in the new parliament on Friday.

It is due to be introduced to the Lords on Thursday 23 January.

Other legislation being brought forward in the Lords in this parliamentary session includes a bill to remove the Church of England bishops' automatic right to sit in the House of Lords. The House of Lords (Removal of Bishops) Bill has been drafted with NSS assistance.