CoE trust to introduce alternative to worship after legal challenge 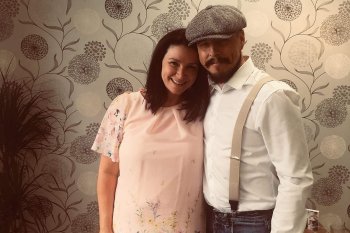 A Church of England multi-academy trust has said it will provide an inclusive alternative assembly for pupils withdrawn from Christian collective worship after two parents launched a legal challenge.

The Oxford Diocesan Schools Trust (ODST) has reached a settlement with Lee and Lizanne Harris (pictured) after they argued that assemblies at Burford Primary School breached their human rights.

During the assemblies children were encouraged to participate in prayer and biblical stories such as the crucifixion were acted out. Burford primary is not a faith school, despite the fact it is part of a C of E trust.

The Harris family, who had children at the school, said Christianity was taught as truth and there was no meaningful alternative for withdrawn pupils.

The ODST agreed to provide alternative inclusive secular assemblies, which will end when the Harrises' children leave the school.

State schools in England and Wales are legally obliged to hold acts of collective worship daily – though in practice this is upheld very inconsistently. Many schools ignore the law or hold inclusive assemblies where there is a moment of silence but worship is not directed, with the tacit agreement of the government and inspectors.

The National Secular Society campaigns to end the collective worship law; advocates inclusive, secular assemblies for all; and argues that worship should not form part of the official school day.

NSS head of education Alastair Lichten said the settlement was "a welcome step" which raised "significant questions over the sustainability of the collective worship law".

"The concessions agreed to by the diocese are the minimum schools should make if the right to withdraw is to be at all viable. Too often children withdrawn from religious worship are marked out and excluded.

"While this settlement is good news for the family, we question why a school with a community ethos had to be legally challenged before such sensible concessions were made.

"This settlement is a reminder that the requirement on schools to hold worship during assemblies is an anachronism which undermines children and families' freedom of religion and belief. Parliament should repeal it, so it no longer provides cover those seeking to impose a religious ethos."

The Harrises also objected to several other religious practices at the school, including evangelical visits and the use of the local church to host key events.

The settlement said the school would: