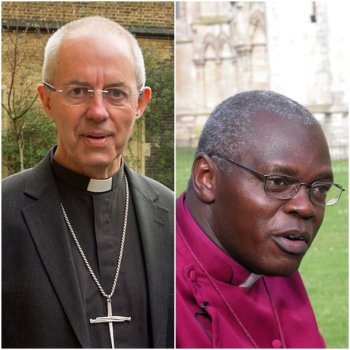 Senior figures in the Church of England including the archbishops of Canterbury and York have faced severe criticism at the Independent Inquiry into Child Sexual Abuse (IICSA).

This week the inquiry heard that 24 disciplinary complaints were made against bishops within the C of E and noted in a 2018 report. All but six outstanding cases were dismissed or subject to no action from archbishops Justin Welby and John Sentamu.

Welby and Sentamu are the two most senior figures in the C of E.

One unnamed witness to the inquiry also described sending 17 letters to Welby's office about the response to abuse from the bishop of Durham and the then bishop of Truro. The witness said the complaints were "just ignored, completely".

National Secular Society vice-president Richard Scorer, acting in his capacity as a lawyer representing survivors, criticised Sentamu for emphasising the concept of forgiveness in a speech on safeguarding. He noted that evidence from earlier IICSA hearings, into abuse in the C of E diocese of Chichester, had shown that "notions of forgiveness could be misused to shield and protect abusers".

He also reiterated a call for external mechanisms to protect victims of abuse within the church, including independent oversight of its safeguarding procedures and a law requiring the reporting of suspected institutional child abuse to the statutory authorities.

He highlighted the reported loss of C of E archives relevant to abuse investigations in 2015 and said oversight of safeguarding should not be left to "gentleman amateurs".

David Greenwood, a lawyer representing victims of abuse, called the Anglican Church "a place where paedophiles have good reason to feel safe" and "a thoroughly disreputable organization" that "cannot be trusted".

Greenwood also accused the church of "trying to buy time until IICSA goes away" in its response to criticism of its safeguarding structure.

The bishop of Buckingham, Alan Wilson, was highly critical of current safeguarding practices in the C of E. In particular he criticised the discipline measure for dealing with formal complaints against members of the clergy, saying it effectively requires bishops to be both judges and pastors.

He added that a list which records penalties imposed under the measure, and which is maintained at Lambeth Palace, had not been updated or distributed since August 2017.

Meanwhile on Wednesday the bishop of Chester, Peter Forster, admitted that he allowed a vicar to continue working despite knowing he had been the subject of an abuse allegation.

Forster also admitted that he had blocked a lifetime ban for a paedophile priest, Ian Hughes, who was jailed for harbouring thousands of pictures of child pornography. He defended his actions on the grounds that Hughes was relatively young, had an "excellent previous record" and was "entirely penitent".

The NSS has long campaigned to protect victims of clerical child abuse and to challenge the privileges afforded to religious institutions which create cover for abuse.