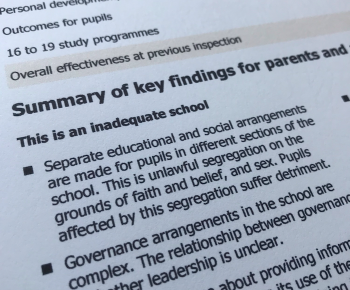 A faith school that unlawfully segregates pupils has failed an inspection triggered by complaints.

The King David High School, a state-funded Jewish academy in Manchester, was rated 'inadequate' by Ofsted inspectors who visited the school in March. The inspection was carried out after "a number of complaints" were made to Ofsted raising "serious concerns".

The complaints followed the death of Sarah Goldman, a 16 year old pupil at the school, who was found hanged in January.

In response to the complaints, Ofsted inspectors sought to confirm whether pupils were being segregated.

The King David High School has three streams of education. The segregated streams, Yavneh Boys (YB) and Yavneh Girls (YG), have curricula that place a greater emphasis on religious education. All other pupils are taught in mixed classes (MS).

YB pupils also have less time to study art, drama, food technology and music than YG and MS pupils. The school day is longer for YB and YG pupils than for other pupils, and YB pupils are given additional lessons on Sunday mornings.

YB and YG pupils "cannot freely learn and socialise" with pupils of the opposite sex and so miss out on the "educational and social benefits" of doing so. YG pupils cannot access the same range of extra-curricular activities as other pupils.

The inspection report noted that a production of the musical 'Hairspray', which was taking place at the time of the inspection, only included pupils from MS and YB. YG pupils were "denied the opportunity" to participate.

In its last inspection in 2015, The King David High School was rated "Outstanding". According to the school's chair of governors Joshua Rowe, the segregation has been taking place "for almost 30 years" and "always with the approval" of the Department for Education.

The inspectors also found teaching is not always "tailored closely enough to individual pupils' needs and abilities", particularly for Pupils in YB and YG. Additionally, recent improvements to pupils' mental health support "have not had long-term impact". Some pupils told inspectors they felt the school "could have been more flexible in helping them" following Goldman's death.

Nearly half the parents and carers contacted by Ofsted were not happy with the school leadership. About two-fifths of parents felt the school "does not deal well with bullying", and some expressed concern about racism and homophobia.

Prompted by complaints, inspectors sought to establish whether rates of absence were "unduly high", and if it was related to "pupils being on military service elsewhere". According to Rowe, inspectors questioned the chair and students "whether the school 'encouraged' students to join the Israeli army and whether the school had adequate Prevent training".

Inspectors found Prevent training was "unsystematic", but there were "no unusual patterns" in sixth-form attendance.

Following the release of the Ofsted report, Rowe said a judicial review to challenge Ofsted was being considered. The school are also considering splitting the site into three separate academies.

In a statement to parents, he said Ofsted had raised other failings in the school "possibly as a tactical move" in case "they are wrong on the segregation point". He said Ofsted may have "an agenda to diminish faith and religion".

He said he thought some of those who made complaints believed the school was "somehow responsible" for Goldman's death, but that this "had nothing whatsoever to do with the school."

He also said it is "difficult to understand" why two-fifths of parents had complained about bullying when "mood-music" at the school and parent meetings "is so positive".

"It is even more worrying that the school has apparently operated this discriminatory system for nearly 30 years without being questioned.

"I hope that future inspections of this school, and other faith schools, will be similarly rigorous. Schools must not be allowed to put religious concerns ahead of preparing pupils adequately for adult life."