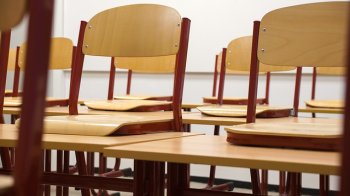 The government has told independent schools that inspectors must be able to speak to pupils after a Jewish school where some parents withdrew consent received a warning notice.

Ofsted inspectors said they "were only able to speak to a limited number of pupils" during a visit to Beis Ruchel in July. Some parents and carers had withdrawn permission for children to speak to inspectors.

The inspectors added that they were only able to ask about some of the protected characteristics outlined in the 2010 Equality Act.

In a letter to independent school heads, the Department for Education (DfE) said the schools may be in breach of standards if inspectors are unable to speak to pupils.

The DfE said inspectors needed to gather "first-hand" evidence about teaching, the curriculum and safeguarding issues.

"However, we have become aware that some schools have taken steps to try and prevent this from happening - either by a lack of co-operation during the inspection and/or actively hindering inspectors, or through encouraging parents to provide written confirmation that they do not wish their child to be allowed to speak to inspectors."

It added that schools could fail to meet standards designed to "ensure that information reasonably requested by inspectors is provided in connection with an inspection" as a result.

Ofsted reports have revealed that parents have withdrawn permission for inspectors to speak to their children at several Charedi Jewish schools in recent months.

The National Secular Society's head of education Alastair Lichten said the government should take the issue of the organised withdrawal of consent to speak to inspectors "very seriously".

"Inspections of independent schools should strike a balance between schools' autonomy and the need to protect children's independent rights. But when children are unable to speak to inspectors loud alarm bells should sound, not least because it raises concerns about safeguarding and children's welfare.

"The government is right to tell schools that this will not be tolerated."

Newly-published notices have revealed that the Department for Education (DfE) warned 15 independent schools, for a variety of reasons, in December. Three of these were Christian, two Islamic and two Jewish.

Ofsted's report on Beis Ruchel also pointed to weaknesses in the teaching of PSHE and said the school's curriculum does not enable pupils to gain GCSE qualifications in science or geography.

The warned schools also featured an Islamic school which "wholly" segregates children by gender and another where personal, social, health and economic education (PSHE) was taught solely through whole-school assemblies.

Bury Park Educational Institute in Luton in Bedfordshire educates boys and girls three miles apart. In October the Independent Schools Inspectorate (ISI) said the school was discriminating and failing to prepare pupils effectively "for the opportunities, responsibilities and experiences of life in British society".

The ISI judgement applied the principles of a landmark ruling at the Court of Appeal in October 2017, which established that it was unlawful for mixed-sex schools to discriminate by gender. The school has now applied to register the sites as two separate schools.

The inspection also highlighted concerns over safeguarding, leadership and the handling of complaints.

At Al-Furqan Community College, a girls' school in Solihull in the West Midlands, the ISI said the personal, social, health and economic education (PSHE) curriculum was not "implemented effectively". Inspectors said PSHE was "solely delivered through assemblies taught to all age groups together", meaning it did not "systematically cover topics in appropriate depth at age-appropriate level".

At Talmud Torah Yetev Lev, a Jewish school in Salford in Lancashire, Ofsted inspectors raised concerns about the safety of the school building. A report in October said there were "some holes in ceilings and walls" which could allow smoke to pass through buildings easily. Door closures were also missing from fire doors, along with ceiling tiles. Some lighting was broken or not operational.

At Excelsior College, a Christian school in Tottenham in north London, Ofsted said the school's teaching and leadership were failing to meet the expected standards.

At Reedham Park School, a Christian school in Purley in Surrey, the ISI criticised health and safety measures, safeguarding checks, premises and leadership.

At The Hall School, a Christian school in north-west London, Ofsted said previously-raised concerns about pupils' safety and welfare, the provision of information and the quality of leadership and management had not been fully addressed.

Mr Lichten said inspectors and the government "should continue to hold independent faith schools to the same standards as those without a religious designation".

The schools were required to provide action plans to the DfE by January and are expected to implement the measures outlined within them by March.

This week Ofsted's chief inspector of schools, Amanda Spielman, also rejected claims that Ofsted is pursuing an "anti-faith" agenda in its inspection of religious schools in an appearance in parliament.

She told MPs on the education select committee that Ofsted did not inspect faith schools with greater "intensity" amid questions from the committee's chair Robert Halfon and Labour MP Ian Mearns.

Halfon said faith bodies had suggested to him "that Ofsted is now delivering an anti-faith agenda". Mearns raised complaints from Orthodox Jewish groups in his constituencies about the requirement to teach about LGBT+ issues.

Spielman said: "We are absolutely not anti-faith, nor do we inspect faith schools in a different way or with a different intensity to any others.

"We are in a country and a time where there are significant tensions between people who have a strong interest in different protected characteristics.

"It is very easy for someone with a particularly strong interest in one of them to come to feel that it is of overwhelming importance and that everything else that is set out in law must be set aside because their particular area of interest is so strong."

Two weeks ago Spielman defended Ofsted's commitment to children's rights over religious concerns during another parliamentary appearance before the Commons public accounts committee.

Meanwhile this week the charity regulator in England and Wales launched an investigation into the proprietor of a private Muslim school which has been repeatedly warned about its operations by Ofsted.

The Charity Commission will study the governance, management and administration of the Albayan Education Foundation, an educational and humanitarian charity which runs the independent Birmingham Muslim School.