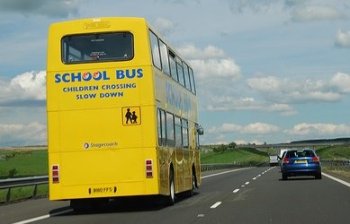 The National Secular Society has criticised a council in north Wales for abandoning plans to review its provision of discretionary free transport to faith schools.

Wrexham Council had proposed removing the service, which takes children over long distances to 17 faith schools, as part of a programme of budget cuts and tax rises.

The council provides free travel for children who live more than two or three miles from faith schools, even when those children have non-faith schools nearer to their homes. It estimates that the service costs £302,000.

The council's budget review has also considered the future of services such as local libraries and fortnightly bin collections and proposed a six per cent increase in council tax. It says it faces a £9m shortfall in its budget for 2019-20.

It has now said it will not review the faith school transport scheme after receiving feedback.

Council leader Mark Pritchard said: "We've had a long discussion between the political groups within the alliance and we've decided we won't be taking it forward."

The headteacher of the only faith-based secondary school in the area was among those who publicly criticised the plan. But around half of people who responded to a council consultation welcomed the proposed change.

NSS chief executive Stephen Evans said it was "alarming to see councillors bowing to pressure from the vocal faith schools lobby in this way".

"With the council facing a budget shortfall, this decision to continue with discriminatory and discretionary spending on free transport to faith schools means the authority will now be forced to make cuts elsewhere.

"If parents feel strongly about children attending a more distant faith school, it is reasonable to expect them to meet the cost rather than the taxpayer and for public funds to be channelled where they are most needed."

Last month the NSS wrote to councillors to urge them to take a decision on the issue based on "equality for all families and taxpayers".

Wrexham is one of a number of local authorities which provide a service that goes beyond the minimum requirement. But in recent years several councils have reviewed their provision of discriminatory transport to faith schools.

The NSS campaigns in favour of equitable school transport policies which are free from religious privilege and fair to all families and taxpayers.