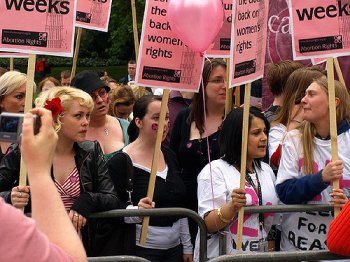 The National Secular Society has welcomed the creation of a buffer zone around a west London abortion clinic.

Ealing Council voted to implement a public spaces protection order (PSPO) affecting the area around a Marie Stopes clinic on Tuesday evening. Those who breach the PSPO would be liable to fines or prosecution.

Councillors have recently held a consultation on how to prevent "intimidation, harassment and distress" for women accessing the clinic, following a petition set up by local campaigners.

Supporting the motion, council leader Julian Bell said the proximity of 'pro-life' protests to the clinic has had a "clear detrimental effect" on women using the services, those supporting them and clinic staff. He said the "vast majority" of Ealing residents supported the implementation of a 'safe zone'.

Ealing is the first council in the country to confirm the adoption of buffer zones around the clinics. But in recent months several others have indicated a willingness to do so, including in Birmingham, Manchester and Portsmouth.

And in November the home secretary, Amber Rudd, ordered a review of intimidation and harassment of patients outside abortion clinics. The review could result in a nationwide crackdown on anti-abortion protesters' activity.

The clinic in Ealing provides around 7,000 medical and surgical abortions a year. John Hansen-Brevetti, its clinical operations manager, told the Ealing Times anti-abortion protesters had been harassing women over three decades. He said "pavement counsellors" were outside the clinic every day and approached every patient on the way in and out.

"People come into our consultation rooms crying and shaking, sometimes we have to wait to take their blood pressure because they're so anxious having been through that."

Anna Veglio-White, a co-founder of the group Sister Supporter, said she had seen protesters misdirect women to make them miss their appointments and follow them to their cars to force leaflets through their windows.

The local press also reported that entries in the clinic's log book showed evidence of "aggressive" protesters upsetting patients. In at least one incident the police were called. In another protesters showed a woman a plastic foetus. Another woman was asked: "Are you sure you want to kill your baby?"

And another woman wrote: "I felt very traumatised seeing photos of babies' embryos outside of this clinic. The lady outside will not remove the photos and would not listen to my complaint. If there is any way you can remove these people/group from standing outside please make it happen. This is unacceptable and wrong."

Anti-abortion protesters in the UK are often affiliated to religious groups such as 40 Days for Life, a Christian-based global campaign body. The group says its mission is to "show local communities the consequences of abortion in their own neighbourhoods, for their own friends and families". Protesters' tactics have included holding vigils, praying in public, singing hymns and chanting.

In 2015 the British Pregnancy Advisory Service said an abortion clinic in an unnamed area would close "as a direct result of protest activity".

Stephen Evans, the NSS's chief executive, welcomed Ealing's decision to rubber-stamp the plan and called for similar action across the country.

"Anti-abortion groups are within their rights to protest but that cannot include harassing and intimidating women as they are simply trying to access healthcare. These tactics prey on patients at a moment when they should reasonably be able to expect confidentiality and evidence-led advice from trained professionals.

"Introducing a buffer zone is a sensible move in these circumstances", he said.

The Society for the Protection of Unborn Children has said it will support any legal challenge to the PSPO in Ealing.

Image: Pro-choice demonstrators, from Flickr, by internets_dairy [CC BY 2.0]