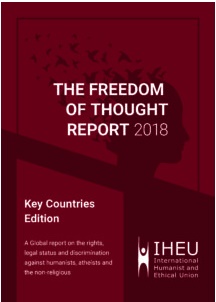 Saudi Arabia has been named the worst country in the world to be an atheist in a new report monitoring the rights and treatment of the non-religious.

On Monday the International Humanist and Ethical Union (IHEU) published the latest Freedom of Thought Report, which ranks the best and worst countries to be an atheist.

All of the 10 lowest-ranked countries either have Islam as their official religion or have legal systems based on Islamic sharia law. Those countries are: Iran; Afghanistan; the Maldives; Pakistan; the United Arab Emirates; Mauritania; Malaysia; Sudan; and Brunei.

Saudi Arabia comes into particular criticism for a 2014 law defining the "promotion of atheist thought in any form" as terrorism, and for the prosecution of liberal activists and campaigners generally. The report notes that the kingdom issued a death sentence in 2017 to an alleged 'apostate', Ahmad Al-Shamri, on the accusation of atheism.

The report prominently highlights an "anti-blasphemy crackdown" in Pakistan over the last year. Several alleged atheist bloggers and activists have been arrested and tortured on charges of making posts online that were "insulting" to religion.

Pre-trial detention and the slow progress of 'blasphemy' cases is a well-known issue in the Pakistani justice system, and some of those arrested as 'atheists' early last year remain in prison.

The report notes that the appearance of Malaysia and the Maldives reflects a rise in anti-atheist rhetoric in the past few years. In the Maldives, alleged atheists have been kidnapped, secular activists have been disappeared or murdered and citizenship is restricted to Muslims. The previous government had been running an autocratic programme of Islamisation, though this may change following an unexpected defeat in last month's elections.

The UK is ranked 133rd out of 196 countries. The UK performs well on laws and policies protecting freedom of religion or belief, as well as freedom of expression. But extensive religious privileges and legal exemptions, some linked to the established state church, gave "cause for concern".

The report also highlighted state funding of religious schools which have powers to discriminate in admissions or employment – along with the legal requirement in England, Wales and Northern Ireland for every state-funded school to hold a daily act of "collective worship".

The discrimination inherent in the UK marriage law was highlighted as notable concern, as was the emergence of sharia councils that rule directly on some family or 'moral' matters. The report noted that the possibility of "social coercion" to use religious courts or tribunals was "very clear".

The National Secular Society campaigns to address several of the issues highlighted in the report. The NSS calls for the disestablishment of the Church of England, the end of state-funded faith schools and compulsory worship in schools and protection of the principle of one law for all.

The IHEU report finds that an overwhelming majority of countries fail to respect the rights of humanists, atheists and the non-religious.

Of the best performing countries Belgium, Netherlands, Estonia and Taiwan are congratulated for their "pluralistic" approach to religion in public life. Estonia, demographically one of the most non-religious countries in the world, shares the top spot with Taiwan, which is socially religious but has secular safeguards which appear to protect the rights of the non-religious.

IHEU president Andrew Copson said the report painted "a dark picture, with significant discrimination faced by our non-religious friends and colleagues around the world".

Welcoming the report, NSS CEO Stephen Evans said: "Whilst the persecution faced by religious believers is rightly well documented, the discrimination faced by people because of their non-religious beliefs or secularist opinions often gets overlooked. This report plays an important role in addressing that void.

"People of all faiths and none must have the right to believe what they want, and speak freely about those beliefs, without facing discrimination, persecution, violence, harassment or threats. This reports highlights the reality that a lack of separation between religion and state too often impedes the realisation of basic human rights and freedoms."