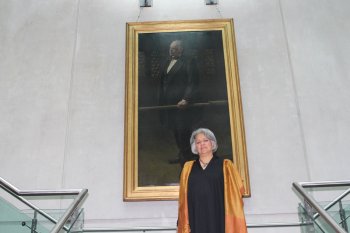 Delivering the NSS's second annual Bradlaugh Lecture at Manchester Art Gallery on Saturday, Gita criticised Indian politicians for their part in Hindu extremist movements and British politicians for appeasing them.

She compared the secularism of India's constitution to the secularism advocated by NSS founder Charles Bradlaugh, citing a common determination to address the suffering of "the most marginalised and the most oppressed".

Gita described the RSS, which was founded in the 1920s, as a "very strong, disciplined paramilitary movement" which held "great power" in India. She said even "relatively liberal" prime ministers had been involved with the RSS and it had recently become particularly strong, with members dominating senior governmental positions.

She said the BJP's aim is to introduce one law in a country which has a history of multicultural laws, but for that law to be Hindu-majoritarian.

She said the term 'Hindutva' was coined in 1923 and described "a movement which was concerned both with purifying Hinduism and conversions to Islam". She said it had been challenged by various left-wing rationalist movements during the 20th century but had "come into its own" in the 21st.

She linked its recent rise to outbreaks of violence against religious minorities and riots in India. These have included mass killings and lynchings, particularly of those thought to deal in beef. In 2017 there were 27 deaths related to cow protection in India.

She noted that during a series of killings in 2002 Hindutva attackers had access to electoral registers and knowledge of businesses which were not obviously owned by Muslims. At the time Modi had just become prime minister "and these happened under his watch with police standing by".

She also described a series of mass attacks on Muslims, churches and converts to Christianity in 2008 and said Hindu extremists had launched terrorist attacks, for example by placing bombs in shrines. These were often presented as a response to terrorist attacks by Muslims.

She also warned that Hindutva was becoming more "dangerous" as a result of its decline in popularity. The BJP had failed to deliver economic growth as it had promised, meaning it was engaging in "deflections" in an attempt to shore up support.

She said Hindutva had inspired attacks on free expression. The role of Hindu extremists in the death of Gandhi was being downplayed in schools. There were attacks on "the scientific temper itself", with scientific evidence manipulated to support the racialised theories supported by Hindutva ideology.

She added that the academic left "has no resources to deal with this because it's become so relativist in its thinking".

"If universalism is rejected as a principle then the only way of working out where you stand is to decide between your tribe and the tribe of the other."

She said Indian media had become "pretty toxic", citing an example of a right-wing channel which had said dissenters needed to be "eliminated".

And she said it was difficult for interfaith couples to marry in India because they had to declare their intentions in advance and there were conscious attempts to undermine them.

Gita said opponents of Hindutva had a "strong sense of ownership" of India's constitution and called last week's Supreme Court judgement legalising homosexuality "remarkable". She said the judgement had served as a reminder that majoritarian views cannot dictate constitutional rights, there is a right to equality before the law and the constitution is "a living document".

"A lot of the discourse around is one set of people pointing fingers at another set of people. It's something that is happening with Muslim groups as well as Hindu groups.

"Whether it's Labour or the Conservatives the management of minorities is seen as being done through communal and fundamentalist organisations. This is so insane but it continues."

Gita said the authorities in Britain such as the Greater London Council (GLC) had funded Hindu extremist groups. She strongly criticised the Charity Commission for failing to act on groups such as Hindu Swayamsevak Sangh (HSS), which has close links with RSS.

Gita highlighted a long-standing history of links between the Hindutva movement and European fascists, particularly in the 1930s when Hindutva leaders supported Hitler and Mussolini. She said these leaders spoke of their admiration for Nazi Germany for "purging the semitic races" in the 1930s.

She said these Hindutva leaders were now being hailed by neo-fascist groups such as Golden Dawn in Greece and prominent members of the "alt-right". She named Steve Bannon, the former chief strategist to President Trump, and the white supremacist Richard Spencer as examples.

And she noted that the Jewish right in Israel has embraced the Hindutva movement despite its ongoing admiration for the perpetrators of the Holocaust.

Gita contrasted the Hindutva movement's embrace of fascism and British imperialism with the behaviour of those who led the campaign for Indian independence. These leaders sided with left-wing and secular movements, called for asylum for Jews after Kristallnacht and embraced women's rights.

Gita said the topic of Hindutva was "usually ignored" by think tanks and the press and thanked the NSS for the opportunity to address it.

Stephen Evans, the NSS's chief executive who chaired Gita's talk, thanked her for a "fascinating exploration of an under-explored topic".

"This lecture served as a timely reminder of the need for laws and public policies based on the rights of individual citizens rather than their religious identities. It reminded us of the importance of events in India both in their own right and for their impact elsewhere.

"It highlighted the need to stand up to both exclusionary movements of the right, whatever form they take, and relativists on the left who indulge reactionaries who meet a short-sighted identity politics agenda. It was also a reminder of the continuing relevance of the legacy of Charles Bradlaugh, who stood for free, fair societies in which everyone's rights were respected.

"We'd like to thank Gita for highlighting this vital issue and sharing her vast wealth of knowledge with us, and everyone who came along to the talk for playing a part."

The Bradlaugh Lecture provides a space for a distinguished speaker to explore a secularist topic in depth. Find out more.

The video of the 2018 lecture are now online.