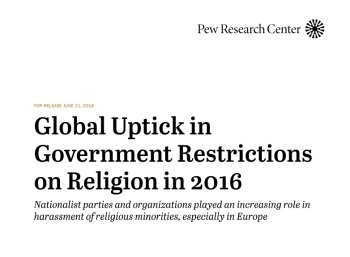 More than four in ten countries had "high" or "very high" levels of restrictions on religion in 2016, according to a newly-published report from the Pew Research Centre.

The report also found that government-led harassment of minority religious groups is increasing globally. More than a quarter of countries (28%) had "high" or "very high" levels of government restrictions on religion in 2016, an increase from 25% the year before. The figure was at its highest since 2013.

Government restrictions on religion were defined as "laws, policies and actions by officials that restrict religious beliefs and practices". The report also looked at "social hostilities involving religion", which it defined as "acts of religious hostility by private individuals, organisations or groups in society".

Government and socially-based harassment were both significantly higher in the Middle East and North Africa than anywhere else. Government restrictions had increased there but social harassment had declined since 2013. Asia and the Pacific was the second worst region.

Among the 25 most populous countries in the world, Egypt, Russia, India, Indonesia and Turkey had the highest overall levels of religious restrictions. In all of these countries religious groups attempted to prevent other religious groups from operating.

Last year a Pew analysis found that countries with official or preferred religions were "more likely to place a high level of government restrictions on other religious groups".

The new report also said nationalism played an increasing role in the harassment of minority faith groups, particularly in Europe where it was mostly used to target Muslims. A growing share of the incidents of government restrictions or social hostilities in 2016 involved political parties or social groups espousing nationalist positions.

"Only secularism can defend both individuals' freedom to practice religion and their freedom from it. Religious freedom is a qualified right which can be legitimately restricted, provided the restrictions are proportionate to the harm they are preventing. But it is also important to defend the freedom to worship and practice religion within these reasonable constraints.

"The most significant threats to religious freedom tend to arise when groups or individuals attempt to impose their religion on those who do not fully share it. We should also be wary of nationalist movements which target religious minorities – and note that many of these movements also ally themselves to exclusionary religious worldviews."

Mr Sloggett said the contrast between these figures raised questions over Pew's methodology and the way it had defined terms.

"The Pew report says almost nothing about the harassment of the non-religious or those who don't easily fall into traditional religious categories. Its authors should ask: have they relied too heavily on western-centric sources? And have they set consistent standards for harassment, no matter which group it's applied to?"

The Pew researchers' primary sources included countries' constitutions and reports from human rights groups, US and UK government departments, the EU and the UN special rapporteur on freedom of religion or belief.

The report made no mention of religiously-motivated persecution of LGBT+ people. Its references to women were almost entirely restricted to countries or movements which prevent women from, or harass women for, wearing religious dress.