Restrictions on religion higher in countries with official religions - report 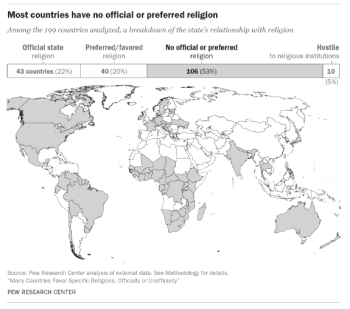 Countries with an official or preferred religion are "more likely to place a high level of government restrictions on other religious groups," according to independent research.

A new Pew Research Center analysis investigated the impact of religion in 199 countries and territories around the world, and on the relationship between religion and government in particular.

The research found that the majority (53%) of countries have no official or preferred religion. Only 22% do have an official state religion. The United Kingdom is within this minority. Twenty per cent of countries have a 'preferred/favoured' religion, while 5% are actively hostile to religious institutions.

The most common government-endorsed faith is Islam, with 27 countries enshrining Islam as their state religion. While only 13 countries designate Christianity as a state religion, the analysis found that "Christian churches receive preferential treatment in more countries – 28 – than any other unofficial but favoured faith".

The report also discovered that countries that have an official state religion "are more likely to place a high level of government restrictions on other religious groups". This was true even when controlling for the countries' population size, level of democracy and level of social hostilities involving religion.

The report also said countries with a state religion are significantly more likely to confer "privileged status" on its official religion: 98% of these countries provide funding or resources for educational resources, religious property or other religious activities.

Stephen Evans, National Secular Society campaigns director, said: "This report serves to highlight that the separation of religion from state is in no way inimical to religion or the rights of religious believers. Indeed, secularism protects citizens from the dominant religion.

"Here in Britain the privileging of religion is a significant cause of inequality and unfairness. Removing religious privilege is a key part of ensuring equality for all. This is particularly pertinent in the UK where religious demographics are rapidly changing."