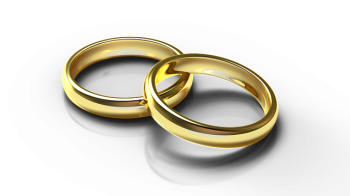 It is significantly harder for those seeking same-sex or non-religious weddings to get married than those seeking religious ceremonies in England and Wales, National Secular Society research has revealed.

We've found that over 80% of places where people can get married are religious. But far less than a third of weddings (26% involving opposite-sex couples and 0.7% involving same-sex couples) were religious in 2015.

Same-sex couples can only get married in 16% of registered marriage venues – almost all of which are civil venues. Even there they face heightened competition from opposite-sex couples who want a civil marriage, or whose application for a religious marriage is rejected.

In response to the findings we've written to the government to highlight the "deep inequalities" the current system causes and call for the institution of marriage to be "fully secularised".

Our figures came from an analysis of government data on places of worship and civil venues registered for marriage, and lists on the Church of England and the Church in Wales websites.

We also found that registering a venue for religious marriage is easier and cheaper than registering a venue for a non-religious marriage. The former involves completing a two-sided form giving details of 20 householders who attend the place of worship and paying a one-off fee of £123. The latter involves agreeing to the terms and specifications of a 36-page manual and paying a large licence fee that must be renewed every three years.

Manchester City Council charges £900 for a civil wedding licence. Cost is likely to be part of the reason why only a quarter of couples on low incomes get married, compared to almost 90% of middle earners.

In his letter to the government NSS chief executive Stephen Evans called for legislative reform to separate the legal act of marriage from religion.

"In order for marriage to continue to fulfil its role as providing a stable institution for couples and their children, its legal aspects must be separated from religion so that it can be truly inclusive and accessible to all," he wrote.

We suggested that reform could mean allowing all couples to marry anywhere they wished, provided an approved registrar oversaw the legally-binding part of the ceremony. Under current laws a legally-binding wedding must take place in either a registered place of worship or an approved premises for civil weddings and civil partnerships. The only exceptions to this are for Jewish and Quaker weddings, which may take place anywhere.

We also said couples should have greater freedom over the content of civil wedding ceremonies. At present non-religious weddings may not contain any religious references at all – even in peripheral aspects such as readings and the music during the legal part of the ceremony.

Explaining the decision to write to the government, Mr Evans said: "It's unacceptable that arranging a same-sex or non-religious wedding brings extra difficulty and cost.

"The marriage laws in England and Wales are archaic, incoherent and unfair. Ensuring a more equitable arrangement which safeguards everyone's rights needs to be part of wide-ranging reform of marriage law which includes the separation of civil and religious marriage.

"Marriage should become a civil matter whereby all marriages are legally registered by a state-regulated registrar. Alongside the ceremony couples would be able to exchange any other vows they wished.

"Couples should be free to marry anywhere so long as that place is agreed with the registration authority and a civil registrar or authorised celebrant is present to conduct the legal aspect of the ceremony."

Over 1,000 religious denominations are currently represented in the government's list of places of worship registered for marriage. These include 'Who object to be designated by any distinctive religious appellation', which has registered its place of worship as 'Meeting room'.

Our findings come amid ongoing debate over reform to the marriage laws. The recommendations we made were similar to some of those made in a 2015 scoping report from the Law Commission, which made clear the need for comprehensive marriage reform.

Last year a Channel 4 documentary revealed that almost two-thirds of Muslim women married in Britain were not in legally recognised marriages, as they had not had civil ceremonies alongside their nikah religious ceremonies.

The number of same-sex marriages is rapidly rising. In 2015, a year after same-sex marriage legislation came in force, there were over 26,000 married gay couples in England and Wales. In 2016, this number more than doubled to over 60,000.

In 2017 figures showed that more than one million people were gay, lesbian or bisexual.