Priest’s certificate may be used for admissions, says regulator 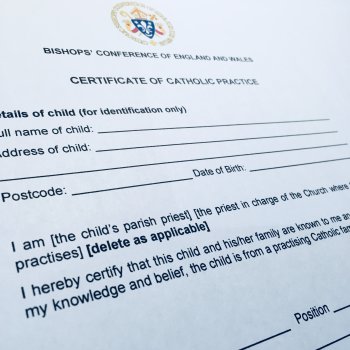 Catholic schools may accept a certificate signed by a priest as a reason to give pupils priority in admissions, the Office of the Schools Adjudicator (OSA) has ruled.

Schools will be allowed to use the Certificate of Catholic Practice, which was introduced in 2016, as proof that pupils come from a "practising Catholic family".

The National Secular Society has described the implications of the decision as "outrageous".

Alastair Lichten, the NSS's education and faith schools campaigner, said: "It's outrageous to allow priests to act as gatekeepers to publicly-funded schools and empower them to determine whether pupils are eligible for a school place arbitrarily.

"No discrimination against pupils on the basis of their religious background should be considered fair. All schools funded by the taxpayer should be open and accessible to all."

The certificate was brought in to replace a range of other criteria which were used to allow Catholic families to jump the admissions queue. These included forms and questioning designed to prove regular attendance at mass.

That year the OSA ruled that the certificate was "unfair and arbitrary". It upheld complaints about unclear admissions rules at four Catholic schools in Surrey and a Catholic college in west London. It said the certificate breached rules that parents must be able to "easily understand how any faith-based criteria will be reasonably satisfied".

But it has now reversed its decision and said schools that demand the certificate will be considered to be "striving" to meet the requirements of the school admissions code. In 2014 the Government said criteria for admissions in oversubscribed schools "must be reasonable, clear, objective, procedurally fair, and comply with all relevant legislation, including equalities legislation".

The Catholic Education Service (CES) said it was "extremely pleased" with the OSA's decision, calling the certificate "a great help to parents". Last year it threatened to take the Government to court over the OSA's rejection of the certificate before backing down. It also said schools have continued to use the document since the regulator's original decision.

The new ruling comes as the Government considers raising the 50% cap on faith-based admissions to faith schools and introducing a new wave of Catholic schools. The NSS is lobbying against the move and campaigning for a moratorium on the opening of new faith schools, followed by the phasing out of state-funded faith-based education.

The 50% cap isn't perfect, but it is the only significant action the government has taken to mitigate the discrimination and segregation wrought by faith based admissions. Please take this opportunity to oppose plans to lift the cap and open the floodgates to a new wave of 100% religiously discriminatory state schools.