Catholic Church backs down on ‘faith certificates’ for pupils 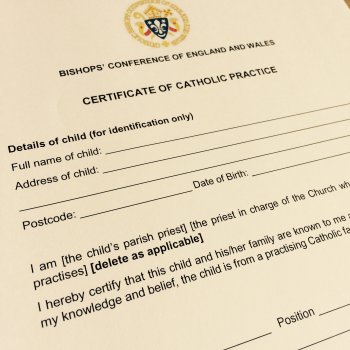 The Catholic Church has dropped plans to take the Government to court in order to give priests the right to arbitrarily determine whether pupils are eligible for a school place on the basis of faith.

In 2016 the Office of the Schools Adjudicator upheld several complaints about the 'Certificates of Catholic Practice' and said schools had "failed" to comply with the admissions code.

Schools Week reports that the Church has now backed down over a threat to challenge the Government with a judicial review.

The certificate, which would be signed by a priest, testifies: "I hereby certify that this child and his/her family are known to me and, to the best of my knowledge and belief, the child is from a practising Catholic family."

But Schools Adjudicator Dr Bryan Slater ruled that the certificate did not meet the requirement to be "reasonable, clear, objective, procedurally fair, and comply with all relevant legislation".

The certificates were "the gift of an applicant's parish priest", he said, and were opaque to parents because even meeting the standard of a 'practising Catholic' in church attendance would not guarantee receipt of a certificate. This would create unfairness.

The Church has now said a certificate will be issued if a parent has attended mass for a minimum of five years.

A certificate can be signed for parents who do not meet this threshold in "exceptional circumstances".

Stephen Evans, campaigns director of the National Secular Society, welcomed the Church's decision to drop the threat of court action, but said, "No discrimination against pupils on the basis of their religious background should be considered fair.