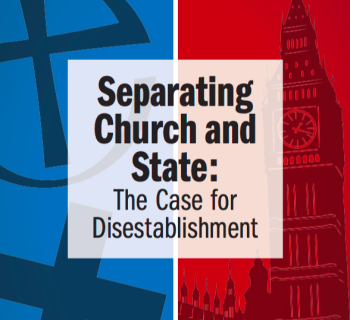 Prince Charles's accession to the throne will offer a "particularly opportune moment" to press the benefits of disestablishing the Church of England, according to a new report published today.

In Separating Church and State: The Case for Disestablishment, the National Secular Society (NSS) says the Prince of Wales will antagonise the non-Anglican majority of the UK population if he retains a coronation oath overtly committing him to uphold the tenets of the Anglican faith.

If he seeks to avoid this difficulty by adopting the title 'Defender of Faith' – as some reports suggest he could – Charles will antagonise many supporters of the Church of England. This will especially apply to those who wish to have more control over their own affairs.

The NSS says the arguments for disestablishment are "compelling" and the long-term prospects of it happening are "positive". "At the present time, there is no clamour for separation from the Government or Members of Parliament," the report says. "The longer-term picture, however, is a far more positive one."

It says overt support for establishment "remains weak". Secularisation, increasing cultural diversity and the divergence between Church leaders' ethical views and those of wider British society will undermine current justifications for establishment.

Other "potential flashpoints" will "emerge with considerable frequency" as a result of the "significant values gap between the hierarchy of the Church and mainstream British public opinion". The report cited the Church's "regressive stance" on issues such as the ordination of female Bishops, same-sex marriage and the decriminalisation of assisted suicide.

The NSS says the arguments commonly made in defence of establishment are "flawed in a number of ways". It says it is "absurd to imagine that religious leaders have access to a wellspring of ethical knowledge that is somehow denied to non-religious citizens" and "the notion that a state-promoted religion is required to uphold a sense of national cohesion is clearly anachronistic in a multi- and non-faith democratic society".

It adds that disestablishment would bring benefits to the Church of England, by freeing it from having core elements of its internal governance subject to an external body's approval. This argument has found sympathy among some senior figures in the Church. Former Archbishop of Canterbury Rowan Williams, for example, recently said establishment "reflects a slightly odd 16th-century view of the absolute inseparability of the Church and state, which is realistically not where we are now".

Williams added that he was "a bit reluctant to think of disestablishing the Church at this particular point, simply because it would feel like a concession to public secularism".

The NSS's report cites several precedents for disestablishment. Church and state were separated in Ireland in 1871 and Wales in 1920. During the 20th century countries including Brazil, Chile, Turkey, South Korea and Sweden abandoned their state religions. Since 1 January 2017, Norway has divested itself of an established Church.

The report calls for initial steps including the removal of Anglican bishops' right to sit in the House of Lords, an end to Anglican prayers in both Houses and the removal of existing legislative relations between parliament and Church.

"The voices of religious privilege are loud and their vested interests are strong," it concludes. "But if the problems of twenty-first century life are to be effectively addressed, and if Britain is to become a modern state rather than one in which Parliament continues to cleave to its mediaeval past, then the separation of church and state needs to be part of the solution."

Commenting on the report, NSS chief executive Stephen Evans said: "The disestablishment of the Church of England is both desirable and realistic. No state can protect the rights of all freely and fairly while maintaining official links to a religious institution. And establishment is increasingly incongruous with the British people's attitudes to religion.

"Parliament should begin by taking smaller steps, such as revoking the right of Anglican Bishops to sit in the House of Lords. In the long run we are confident that opportunities will arise to press the case for more fundamental change, and the hollow nature of the arguments for establishment will be exposed."

Read the report: Separating Church and State: The Case for Disestablishment