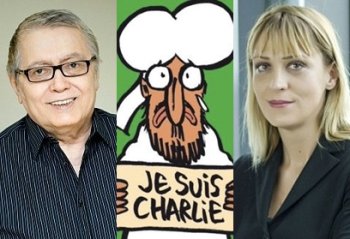 Two Turkish journalists have been sentenced to two years in prison for republishing a cover of French satirical magazine Charlie Hebdo with a cartoon of Muhammad, amid rising concerns about freedom of expression in Turkey.

The court in Istanbul convicted Cumhuriyet newspaper columnists Ceyda Karan and Hikmet Cetinkaya of inciting "hatred and enmity." The pair were however acquitted of the separate charges of "insulting religious values."

The pair went on trial in July 2015 after featuring the cover image of Charlie Hebdo's survivors' edition – which featured an image of a weeping Muhammad – in their columns for the secular, opposition Cumhuriyet newspaper in an act of support for freedom of expression.

The verdict was met with cries of "Allahu Akbar" in court, according to Cumhuriyet reports.

When the edition was published Turkey's Prime Minister Ahmet Davutoglu condemned the publication of cartoons of the Muslim prophet as an "open provocation".

The convictions come amid fears of a worsening government crackdown on press freedom in Turkey with an alarming number of journalists facing criminal sanctions or violence and opposition news outlets being officially harassed or obstructed.

Meanwhile, Index on Censorship has warned of a "stark deterioration" of press freedom' across Europe. The group's Mapping Media Freedom project has identified a 30% rise in incidents involving journalists, voicing particular concern about Turkey and Ukraine.

Earlier this week the Turkish Prime Minister sought to calm fears that the country's secular constitution is under threat after parliamentary speaker Ismail Kahraman, who is overseeing the redrafting the country's constitution, said the Muslim-majority country needed a new "religious constitution".