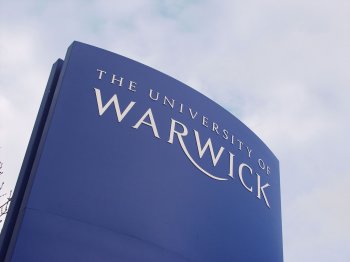 Maryam Namazie has been blocked from speaking to the Warwick Atheists, Secularists and Humanists' Society after the Student Union said the ex-Muslim campaigner could 'insult' religion.

The National Secular Society has strongly condemned the decision. NSS campaigns manager Stephen Evans commented: "Universities have barely returned to a new academic term and we are already seeing attacks on free speech. It is absurd and sinister that an atheist speaker should be banned from campus for their views, and that 'insulting other faiths' is grounds for a speaker to be banned.

"The reasoning behind banning Maryam Namazie from speaking is the kind of muddled thinking that results in the capitulation to an Islamist agenda, which seeks to shut down all criticism of Islam."

In a statement reprinted by Namazie, the Student Union said: "We have a duty of care to conduct a risk assessment for each speaker who wishes to come to campus."

Extraordinarily the Student Union said Namazie, an NSS honorary associate who campaigns for human rights and equality, could incite hatred.

"There a number of articles written both by the speaker and by others about the speaker that indicate that she is highly inflammatory, and could incite hatred on campus. This is in contravention of our external speaker policy".

Shockingly, the policy states that external speakers on campus must "seek to avoid insulting other faiths or groups, within a framework of positive debate and challenge".

Mr Evans added: "If we restrict expression in fear of it causing 'insult' we are handing huge power to oppressors to stifle our self-expression. Many hardline religious believers find the very idea of atheism and apostasy offensive. A speakers policy which bans 'insulting' religion is effectively a ban on apostate and atheist speakers. It could also be used to prohibit religious speakers asserting the validity of their faith over others. The policy is an atrocious restriction on free expression and no credible university could operate under such conditions."

Writing on the decision by the Student Union to exclude her, Namazie said: "Inciting hatred is what the Islamists do; I and my organisation challenge them and defend the rights of ex-Muslims, Muslims and others to dissent.

"The Student Union position is of course nothing new. It is the predominant post-modernist 'Left' point of view that conflates Islam, Muslims and Islamists, homogenises the 'Muslim community', thinks believers are one and the same as the religious-Right and sides with the Islamist narrative against its many dissenters."

She added, "These sort of Lefties have one set of progressive politics for themselves – they want gay rights, equality for women and the right to criticise the pope and the Christian-Right, and another for us."

The Warwick Student Union policy also says that speakers "must not spread hatred and intolerance in the community" or disrupt "social and community harmony".

**Update** Benjamin David (President of Warwick Atheists, Secularists and Humanists) has published a response on the student union's website.