Saudi ministry: 'Free expression is an abuse of religious rights' 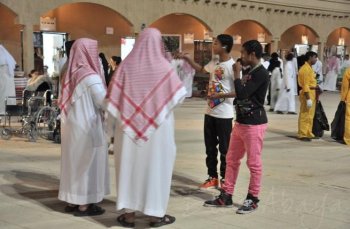 Saudi Arabia has reiterated its call for a global blasphemy law, claiming that free speech leads to violations of "religious and ideological rights."

Abdulmajeed Al-Omari, the director for external relations at the Saudi Ministry of Islamic Affairs, a government body which is tasked with "propagating Islam", was quoted by the Saudi Gazette as saying, "freedom of expression without limits or restrictions would lead to [the] violation and abuse of religious and ideological rights."

He called for insulting religion to be criminalised, and urged for an 'intensification' of efforts aimed at stamping out affronts to religious symbols.

In what amounts to a call for a global law against blasphemy or 'defamation of religion', Al-Omari added that "everyone" must "intensify efforts to criminalise insulting heavenly religions, prophets, holy books, religious symbols and places of worship."

The Saudi Gazette reports that Al-Omari claimed the 'abuse' of free speech created religious extremism and, bizarrely, violations of human rights. The paper added that the Saudi government had "reiterated its call" for the international community to make illegal "any act" which 'vilified' religious beliefs.

The comments, reported in Saudi Arabia last week, come less than two months after the International Federation for Human Rights (FIDH) warned the Organisation of Islamic Cooperation (OIC) against a renewed push for a global prohibition on insulting religion.

The FIDH wrote shortly before an OIC conference held in June 2015 that any such law would be "incompatible" with human rights.

In February 2015, Keith Porteous Wood, the executive director of the National Secular Society, noted at a meeting of the European Parliament Platform for Secularism in Politics (EPPSP) in Brussels, that the OIC had been involved in a "15 year project" to have defamation of religion criminalised globally.

He commented on the most recent developments from the Saudi Ministry of Islamic Affairs; "Whether imposed through bullets or diplomatic bullying, blasphemy laws must never be tolerated. These schemes are increasingly repackaged as 'defamation of religion' laws, but they are one and the same: the idea that religion should be protected by law from criticism or satire.

"We again see the cynical and brazenly hypocritical use of human rights language and terminology to push a theocratic and Islamist agenda, with ambitions that it is enforced not just in Saudi Arabia, but across the world."

The Saudi king recently left a holiday in France ahead of schedule, after reports that female French police officers were removed from the area around the villa where he had been staying in order to protect his 'privacy'.