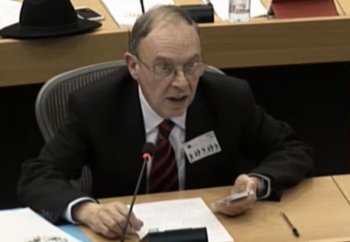 The National Secular Society has raised concerns about the limits imposed on free speech by unofficial blasphemy laws enforced by the threat of violence.

At a meeting of the European Parliament Platform for Secularism in Politics (EPPSP) in Brussels, NSS executive director Keith Porteous Wood cited polling which found that 25% of Muslims aged 18-34 disagreed with the statement, "acts of violence against those who publish images of the Prophet Mohammad can never be justified". He described this as a "huge challenge."

He also noted the danger of anti-blasphemy campaigns in the UN and said that secularists "ought to be aware that there has been a 15 year project by the Organisation of Islamic Cooperation (OIC) to have defamation made an international law."

The NSS, which has long opposed any restrictions on freedom of expression on religious grounds, expressed its serious concerns in 2012 after Baroness Sayeeda Warsi, who was then "Minister for Faith", signed a Memorandum of Understanding with the OIC to "work together on issue of peace, stability and religious freedom."

Keith Porteous Wood added that the West should be "very worried" by "unofficial blasphemy laws" and also raised the issue of "religious-aggravated public order offences" in the UK that have "very low prosecution thresholds but a 7 year prison term". He described the threat to free speech posed by this legislation as "poisonous" and said it was "almost worse" than explicit blasphemy laws.

Sophie in 't Veld MEP, an honorary associate of the National Secular Society, who chaired the panel, said she was "against any kind of restrictions solely for the reasons of protecting or defending religion or belief".

The director of Justitia, Jacob Mchangama, said that secularists should not "appease extremism" through "misguided identity politics" and criticised the "redistribution of blame" that occurred after the Charlie Hebdo attack, and the way many commentators argued that the cartoonists were in some way to blame.

Rabbi Jonathan Romain of the Movement for Reform Judaism said that whilst "some Christians were horrified" by blasphemy like the Life of Brian, as many Muslims were by the Danish cartoons, and although "of course" religious satire causes offence, it is "one person's right to express their view, and another person's right to express that they are offended". The Rabbi argued that there were "plenty of religious targets that are worth hitting" with blasphemy and said that there is no right not to be offended.

Rabbi Romain noted that every "tyrannical regime" restricts freedom of speech. He added that free speech "enables us to expose hypocrisy" and quoted examples from scripture of blasphemy and the ridicule of religious beliefs.

He argued that "Blasphemy is in the ear of the hearer, and one person's sanctity is another person's idiocy." Rabbi Romain said restricting free speech to protect religion would be a "cost too high" and added that "freedom of speech has to be total".

Elizabeth O'Casey from the International Humanist and Ethical Union, which the NSS is affiliated with, discussed the fear of violence that was stifling free speech, particularly with regard to newspapers and other media outlets refusing to show images from Charlie Hebdo.

The full discussion can be watched here.