Prosecution of anti-Islam preacher is “in the public interest”, claims Public Prosecution Service 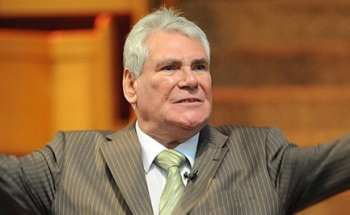 The Public Prosecution Service (PPS) of Northern Ireland have defended their prosecution of James McConnell, the Christian preacher who called Islam "Satanic."

In a letter sent to the National Secular Society, the PPS have doubled-down on their decision to take the case to trial, after the NSS warned that their actions had created a "chilling effect" on free speech. A Christian organisation warned that "many churches will be wary of what they place on the internet until this case is heard and the law is clarified."

Pastor McConnell is being prosecuted under the Communications Act 2003 for sending a "grossly offensive" message. The Pastor said during a sermon that Islam was a "doctrine spawned in hell" and that while there "may be" "good Muslims" in the UK, he didn't trust Muslims generally.

In response to a letter of concern written by the National Secular Society urging the PPS to reconsider its course of action, the Prosecution Service have claimed that their controversial decision is in the "public interest", and have vowed to press on despite a raft of criticism from Christian groups, the National Secular Society and an imam, Dr Muhammad Al-Hussaini, who said he strongly upholds "the moral right of Pastor McConnell and myself, as Christian and Muslim, to disagree about matters of doctrine and belief."

However the Prosecution Service stated that "very careful consideration of all the available evidence including the content of the entire sermon" had been undertaken, and that they were "fully cognisant of the defendant's rights."

The PPS added in their response to the National Secular Society that they had "balanced the relevant public interest considerations" in their treatment of the case, but that due to the "gravity" of the preacher's sermon and the "circumstances of the offence and the offender" they were right to "deal with the matter by way of an informed warning."

Pastor McConnell rejected this warning, which would have remained on his criminal record for 12 months, and this led to the case proceeding to trial at the PPS's insistence.

Extraordinarily, the complaint about McConnell's sermon reportedly came from Dr Raied Al-Wazzan, who recently praised the Islamic State and said that Mosul had "become the most peaceful city in the world" under IS rule. "You can go from east to west of the city without fear," he claimed.

Al-Wazzan is now described as the "main prosecution witness" in the case against McConnell.

There has been widespread condemnation of the PPS's actions, but Assistant Director Michael Agnew wrote that he remained of the view that "the evidence Test for Prosecution is met" and that a prosecution was justified given that McConnell has refused to accept the warning.

NSS campaigns manager Stephen Evans said: "This baffling decision to persist with the prosecution of Pastor McConnell represents a reckless and grievous encroachment upon his - and everybody else's - fundamental right to free expression.

"In our view Pastor McConnell was well within his rights to refuse a warning that would have remained on his criminal record for a year, particularly given that he clearly did not incite violence in his sermon and the PPS do not even appear to claim that he did. Given that, the PPS's behaviour seems even more extraordinary.

"Whatever the outcome of this case, the actions of the Public Prosecution Service are likely to have a chilling effect on everyone's freedom to speak openly about their beliefs.

"In an open and free society, we should all feel able to express our beliefs and opinions without fear of criminal sanction - regardless of how unpalatable others may find them.

"The weapon of 'offense' is increasingly being used to stifle free expression. The desire to live in a harmonious and tolerant society is a noble one, but will not be achieved by the suppression of fundamental freedoms.

"We again urge the PPS to drop this case and issue a full apology to Mr. McConnell."