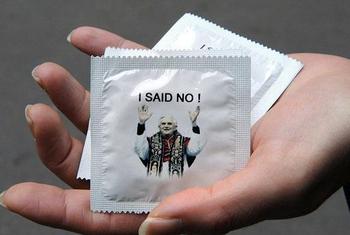 New guidelines from the Diocese of Portsmouth say that Catholic schools should promote "chastity" as the "underlying theme" of Sex and Relationships Education (SRE).

The Catholic Diocese of Portsmouth has published new guidelines on SRE urging Catholic faith schools to teach chastity and warning of relationships that society sees as "normal" but which go against church teaching.

The guidance says that "purity and the virtue of chastity should be promoted" in SRE classes, which should emphasise "sexuality as a gift from God."

"Chastity can be achieved" the guidance says, through "supernatural means." The guidelines say "abstinence should be promoted" in schools, rather than "suggesting that sexual intercourse is fine as long as it is 'safe sex'."

The document complains that "the Church's teachings can appear outmoded, authoritarian and even unrealistic" because sex before marriage, same-sex relationships and cohabitations are "often accepted as part of 'normal' life".

According to the guidance, Catholic teachings, to be taught in SRE, are "based on objective moral principles" in contrast to "mixed messages visible in the social media and across the internet."

It also criticises the resource material available for SRE, complaining that some of it portrays "casual sexual relationships as 'normal.'"

"The content of classes should not offend against modesty," the guidance adds.

Although the paper appears to acknowledge that "many Catholics hold beliefs and views on sex and relationships that are different from what the Church teaches", as recently confirmed by more polling which showed a wide disconnect between the views of Catholics and the doctrines of the Vatican, the guidelines are stringent and affirm that "all staff in a Catholic school are expected to support the teachings of the Catholic Church".

An NSS spokesperson said: "Religious sermons are no substitute for evidence-based sex and relationships education.

"It is outrageous to think of young people receiving such an ideological and doctrinal education about sex and relationships in school, and to think that taxpayers in the 21st century should have to pay for it to take place. The National Secular Society criticises these guidelines in the strongest terms, and again calls for the Government to introduce statutory objective and age-appropriate sex education for all state-funded schools, including faith schools."

A concerned parent recently contacted the NSS about the SRE curriculum at King's Academy in Middlesbrough, which taught sex education in line with the "Maker's Instructions."