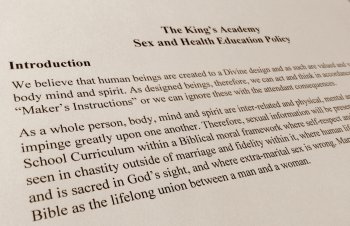 A parent has raised serious concerns with the National Secular Society over the strongly religious nature of sex and relationships education at their child's school.

The sex and health education policy of the King's Academy in Middlesbrough warns pupils of the "consequences" if they ignore the "Maker's Instructions" about sex and relationships.

The taxpayer-funded school teaches "chastity outside of marriage", that "human life begins at conception" and that marriage is "the lifelong union between a man and a woman."

The school begins their policy statement on sex education by stating that they "believe that human beings are created to a Divine design".

The school says that "sexual information will be presented across the School Curriculum within a Biblical moral framework".

The Academy describes its ethos as based on "traditional Christian faith" and the school website says Jesus is "the perfect example of how to know God and love our neighbour as ourselves."

The mission statement for King's Academy says the school is "committed to upholding Biblical values, concepts and morality."

Noting that "other lifestyles exist", the school claims that delivery of SRE takes place in the "absence of judgemental dogma", but ends its policy with the teaching that abstinence is "the only 100% effective form of contraception".

Year 9 students have "special lectures" by "staff and medical practitioners" who present the "Biblical advice on chastity before marriage" and who give so-called "medical reasons" for abstinence before marriage.

The school covers "stereotyping and prejudice" about homosexuality but within the school's teaching "marriage is presented" as only between a man and a woman.

The policy notes that parents have the "right to withdraw" their child from the programme, but given the pervasive nature of religion throughout the teaching, and that the Bible is presented as authoritative "across the School Curriculum" and throughout different subjects, it is unclear how realistic such a right to withdrawal actually is for parents who do not want their pupils taught SRE from a 'biblical' perspective.

The National Secular Society has urgently raised the issue with Nicky Morgan, the Secretary of State for Education, noting our serious concerns about the provision of sex and relationships education by faith schools.

The parent who contacted the NSS about the school said: "This is why we need a fully secular education system for state-funded schools." The parent added that the school's policy needed to be "fully exposed" and that the public "has a right to know" what taxpayer-funded schools are teaching.

Stephen Evans, National Secular Society campaigns manager, said: "If the Government seriously wants to prepare young people for adult life it should ensure that all schools, including faith schools, free schools and academies, have a statutory duty to teach comprehensive and unbiased sex and relationships education.

"Any school which allows its religious ethos to take precedence over the health and wellbeing of its pupils is not worthy of public funding.

"Evidence suggests that abstinence based approaches can be worse than ineffective, leaving young girls more vulnerable to teenage pregnancies and sexually transmitted diseases. LGBT children are also put at risk by the ability of faith schools to teach SRE within their religious framework.

"If schools are unable to distinguish between evidence-based fact and religious belief then there are serious questions as to whether they're capable of running schools in young people's best interests.

"Children's education shouldn't be based on dogma. Taxpayers should not be paying for the propagation of religious beliefs in state-funded schools."

Maintained secondary schools are required to provide basic sex education but academies and free schools do not have to follow the National Curriculum and so are not under the same statutory obligations.

In February 2015, MPs on the Education Select Committee recommended sex and relationship education become mandatory. The Government's response to the select committee report is expected soon.

In a submission to the UN Committee on the Rights of the Child, the National Secular Society this week warned that some schools are failing to put the best interest of young people first and urged the Committee to recommend that UK legislation should require all state-funded schools to provide comprehensive age appropriate sex and relationships education with no permitted opt-outs.