As Cameron says UK “still a Christian country”, 62% tell YouGov they are “not religious” 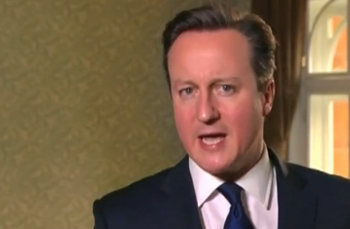 Polling conducted in the run-up to Easter has found that almost two-thirds of Britons describe themselves as "not religious."

In his Easter message, Prime Minister David Cameron claimed the UK was "still a Christian country," but YouGov found overwhelming lack of religion in the UK in its latest poll on religion and belief.

As found in other polling and research, younger Britons were more likely to say that they were not religious compared with over 60s. 68% of 18 to 24 year olds said they were not a practising member of a religion, compared with 59% of the over 60s. Likewise, only 31% of 18 to 24s said they were practising members of a faith group, eight points lower than the 39% of over 60s who said the same.

Clive Field, writing on the British Religion In Numbers blog, commented that when comparing this polling from identical questions asked in 2013, "it is noticeable that, for all the indicators, the movement is in the direction of the least religious position."

As with the figures of those who identify with a religion, belief in God has declined since 2013, from 38% believing in God two years ago, to just 35% now. Belief in a "spiritual power" has fallen by one point, and the number saying they believed in neither had gone up by 4%.

Belief in God showed another sharp difference between younger and older demographic groups. Under-24s are far more likely to believe in neither a god, nor a "higher spiritual power." 47% of 18 to 24s do not believe in either, compared with 27% of over 60s. The NSS has previously welcomed similar polling as bolstering the case for a secular UK, as young people are far less likely to be religious than older generations.

The YouGov figures showed that Easter was devoid of religious meaning for most Britons, with only 13% saying that religion was the "most important part of Easter." Among under-24s this figure was just 8%.

Church attendance over Easter has declined as well, with 83% saying they were not intending to attend church over the Easter weekend. This is four points higher than when that same question was asked in 2013. Belief in the key tenet of Easter — the resurrection of Jesus — has also fallen, with 50% saying Christ did "not come back to life after crucifixion." Under 24s, again, were far more likely to not believe than over 60s. 63% of 18 to 24 year olds said the resurrection did not happen.

Despite this, David Cameron in his Easter message said that "we should feel proud to say, 'this is a Christian country.'" The Prime Minister repeated that whilst the UK "welcomes and accepts all faiths and none", Britain was "still a Christian country."

The Prime Minister praised Christians for living out their religious beliefs in faith schools, and took credit for investing "tens of millions to repair churches" and for the passage of the Local Government (Religious Etc. Observances) Act, which enables councils to hold prayers in their official meetings.

NSS campaigns manager Stephen Evans commented: "For a long time polling and research has shown that the UK is not a practising Christian country. Politicians sound hopelessly out-of-touch when they claim otherwise.

"Britain's rapidly changing religious makeup demonstrates how inappropriate and foolhardy is it to increasingly look to religious groups to provide public services, including publicly funded education, around a third of which is now under church control."

The Pew Research Centre recently published research which forecasted that by 2050 just 45% of the UK population will be Christian. However, by other measures, including the YouGov poll, the percentage of Christians in the UK has already fallen far below 45%.

The full YouGov poll, with analysis, can be found at the British Religion In Numbers blog.