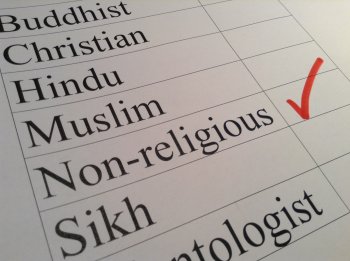 One third of under-24s describe themselves as atheists, according to a new poll which offers more evidence for a "generational shift" away from religious belief.

The YouGov/Times poll found that 42% of adults in the UK said they had no religion, including 19% who described themselves as atheists, 7% who identified themselves as agnostics and 3% as humanists.

49% of respondents described themselves as Christian, whilst 9% were listed as "other".

Most significant in the poll's results is the large generational difference in levels of non-belief. Whilst just one-in-ten over the age of 60 said they were atheists, a third of under-24s described themselves that way. 46% of 18 to 24 years olds said they did not believe in "any god".

Interestingly, the poll noted that political leaders were "viewed slightly more positively as a result of their admissions that they do not believe in God."

NSS president Terry Sanderson said: "This poll is further evidence that organised religion has lost its hold on the imagination of the British people. What it hasn't lost is its residual power over them. Politicians really need to think very carefully about the amount of influence they accord to 'faith leaders' who are speaking for a very few people these days. The public reaction to the recent religious objections to research into mitochondrial disease is an example of the way churches are now regarded as irrelevant.

"The continuing spread of 'faith schools' is going to create another problem soon – when these young atheists mature, they may feel that they do not want such an education for their children and yet so prevalent are religious schools there will be an increasing conflict of interests.

"I suspect these findings are on the conservative side. It is a well-known phenomenon that people always overstate their religious feelings to pollsters. More and more people not only don't care about religion, they are actually beginning to feel hostile towards it."